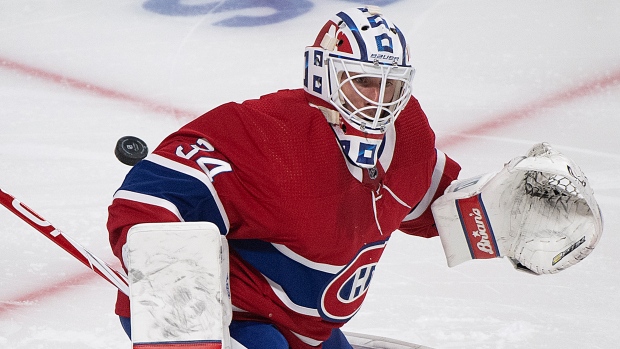 Goaltender Jake Allen is this year's winner of the Jacques Beauchamp-Molson Trophy.

Congratulations to @34jallen, winner of the Jacques Beauchamp-Molson Trophy for 2020-21. 👏#GoHabsGohttps://t.co/NJVzVOLLx7

The trophy is awarded annually to a member of the Montreal Canadiens "who played a dominant role during the regular season, without earning any particular honor" as voted on by media members.

Coming over in a September trade with the St. Louis Blues in exchange for two seventh-round picks, Allen has been steady between the pipes for the Habs in 2020-21.

The 30-year-old enters the final game of the regular season with a save percentage of .907 and a goals-against average of 2.68. He registered his 150th career NHL win on Jan. 21 in Vancouver and played in his 300th career NHL game on March 19 against the Canucks.

Allen has also shouldered much of the load lately in the crease as starter Carey Price has not played since April 19 after sustaining a concussion.

Allen finished first in voting edging defenceman Joel Edmundson and Corey Perry and becomes the team's first winner since Phillip Danault in the 2018-19 season. The trophy was not awarded last season due to the COVID-19 pandemic.

Created in 1981 to honor the memory of the legendary sportswriter who spent most of his professional career covering the Canadiens, the Jacques Beauchamp-Molson Trophy was first awarded to Doug Jarvis in 1981-82.