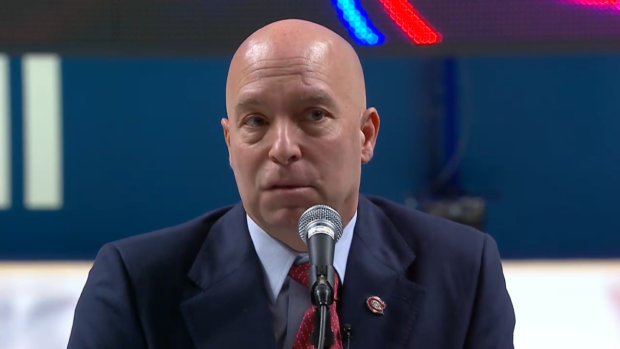 With his new team mired in an 8-29-7 record and sitting dead last in the National Hockey League, Montreal Canadiens general manager Kent Hughes knows he must make changes, but they won't necessarily be done in a short and immediate window.

“I would say we’re viewing it as we’re open to everything,’’ Hughes told TSN Hockey Insider Pierre LeBrun in The Athletic after the team held its pro scouting meetings over the weekend.

Hughes said he met individually with his players during the team's most recent road trip to explain what could potentially happen ahead of the Mar. 21 trade deadline. He did not specify who he spoke with, but did say he talked to veteran defenceman Ben Chiarot, who will become an unrestricted free agent this summer.

“We met with everybody, starting with Ben Chiarot," he said. “Anybody whose name has been circulating in terms of trade rumours or whatnot, to the extent that we can open the doors for them and say, ‘We’re here, we don’t have answers for you today. We’re going to try to improve this team long term. And you may be a player that moves but we wanted you to know if you have questions along the way you can come and see us.’

“We also wanted to take their temperature and see what kind of reaction we’d get. Is somebody like, ‘Yeah, get me out of here,’ versus ‘OK, I’m happy here but if it happens I understand it’s a business.’’’

Hughes, however, said the team may get more work done in the off-season instead of the deadline. “We don’t feel this immediate need to get everything done at the trade deadline,’’ he explained.

He also had an opportunity to talk to goaltender Carey Price, who is still recovering from knee surgery last summer after the Stanley Cup Final. Price spoke to reporters in a team media availability on Sunday about trying to rehab his injury and return to the lineup. While there continues to be rumours and speculation about Price's future with the Canadiens, Hughes said the only focus they have at this point is to see him fully recovered and back with his teammates.

“We spoke to him Saturday,” he said. “Had a good chat with him. There’s not a lot he can say. He’s recovering from surgery and every time he steps on the ice he’s had a setback. He’s going to try it again here. And we’re going to see how the knee responds and go from there.

“But it’s hard to know, it’s hard to see the path right now. I’m not a medical expert and I don’t know the full extent of the issue that persists here. I’m worried that it didn’t work the first two times.’

“Let’s take it step by step, the first step is seeing how he responds this go-around. Our hope is for him and for our team that the knee responds well and he’s actually able to return to action.’’