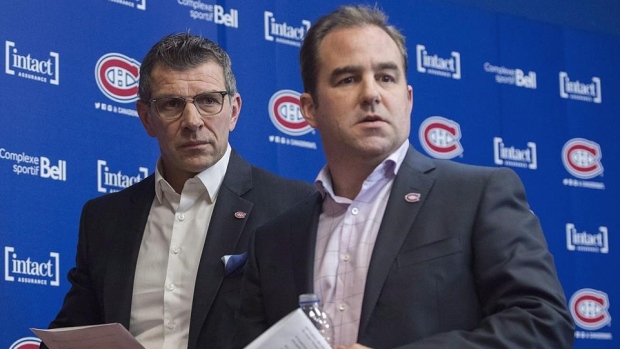 Coming off the team's longest playoff run under his tenure, Montreal Canadiens general manager Marc Bergevin is entering the final season of his contract.

TSN Hockey Insider Pierre LeBrun reported Tuesday on Insider Trading that Canadiens owner Geoff Molson made an offer to extend Bergevin in July, but the two sides have not come to an agreement yet.

"He’s not the only GM entering this season on an expiring deal but there’s no bigger story after seeing his team reach the Stanley Cup Final last year," LeBrun said of Bergevin. "What I can tell you is this. He has talked to owner Geoff Molson about his future dating back to last January. I’m told they spoke again last March. I’m told in July Molson made an offer. There has not been an agreement, read into that what you will. I believe Marc Bergevin wants to stay, but they obviously have to reach a deal that works for both sides. Both sides continue to talk, and there’s a lot of pressure on this situation.

"I don’t think they want this to be hanging over the Montreal Canadiens season. Like I said, there are other guys on expiring deals including Don Sweeney (Boston Bruins), who I think will get a deal done at some point, Don Waddell (Carolina Hurricanes) on an expiring deal, and of course Bob Murray (Anaheim Ducks) and Rob Blake (Los Angeles Kings) in California as well."

Named general manager of the Canadiens ahead of the 2012-13 season, Bergevin is entering his 10th season with the team. Montreal has made the playoffs in six of the nine seasons since he was hired.

Bergevin has presided over two head coaching changes, one in the 2016-17 season when he replaced Michel Therrien with Claude Julien and the other this past February when he fired Julien in favour of Dominique Ducharme.

The 56-year-old spent parts of 20 seasons as a player in the NHL, six of which came with the St. Louis Blues. The Montreal native scored five goals and assisted on 28 in 328 career regular-season games.