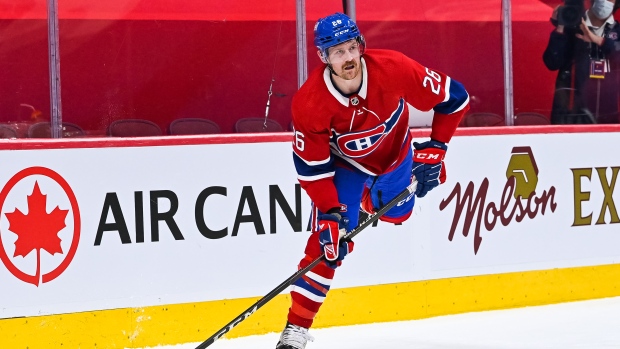 It appears the Montreal Canadiens will not be back to full health when they begin their third-round series against the Vegas Golden Knights on Monday.

Ducharme noted that all three players are progressing and should return in the near future.

Dominique Ducharme says the Canadiens are not very confident any of Jeff Petry, Jake Evans or Jon Merrill will be ready for Game 1 against Vegas. There could be a surprise there, but he says they are all progressing well and should return not too long after that.

The Canadiens completed their sweep of the Winnipeg Jets in Game 4 on Monday without Petry, who is dealing with an upper-body injury.

The defenceman appeared to be injured when he got his right pinky finger caught in a camera hole in the glass during the second period of Sunday's 5-1 win in Game 3. He went to the locker room, but was able to return to action and finish the period on the bench. The 33-year-old played 16:02 over the first two periods of the game and was a plus-1. He did not play in the third period.

Rookie Alexander Romanov made his playoff debut in place of Petry in Game 4.

Evans has been sidelined since Game 1 of the team's second-round series, when he sustained a concussion on a hit from Jets forward Mark Scheifele. Scheifele was suspended four games for charging after the incident. Evans has one goal in four postseason games.

The Canadiens are considered heavy underdogs once again in their third-round series, though Ducharme said he's embracing the role this postseason.

"I personally like to prove people wrong," Ducharme said Friday.

The Canadiens will fly to Vegas on Saturday ahead of Game 1 on Monday.