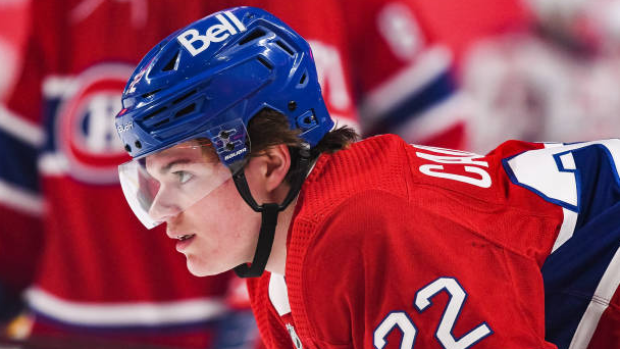 Cole Caufield and Jesperi Kotkaniemi will be healthy scratches when the Montreal Canadiens open their first-round series against the Toronto Maple Leafs on Thursday.

Canadiens head coach Dominique Ducharme confirmed Tuesday that both players will sit Game 1, but added he expects they will both play at same point in the series.

Rookie defenceman Alexander Romanov will be a healthy scratch in Game 1, with Shea Weber set to return to the lineup beside trade deadline addition Jon Merrill. While Weber hasn't officially been ruled in, Ducharme said Tuesday he's “very, very confident” the team's captain will play Thursday.

As anticipated based on practices since Saturday, #Habs Caufield and Kotkaniemi will sit out Game 1. However, Ducharme expects he will play them in the series. @TSN_Edge

Caufield and Kotkaniemi have been skating on an extra line alongside Michael Frolik since Saturday, signaling they would sit Game 1.

Caufield, who joined the team out of college in April, posted four goals and five points in 10 games during the regular season.

Kotkaniemi had five goals and 20 points while appearing in all 56 games during the regular season. The 20-year-old had four goals in 10 postseason games last year.

Romanov, 21, posted one goal and six points in 54 games this season, his first in the NHL.

#Habs Ducharme said “100%” that he would lean on the roster’s depth if he doesn’t get immediate results from the lineup projected to start the series. That is, Kotkaniemi, Caufield, Romanov as options. @TSN_Edge

The team used the following lines during Tuesday's skate.