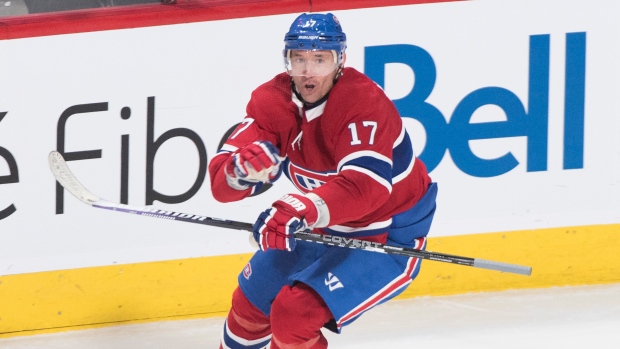 MONTREAL — The Ilya Kovalchuk era in Montreal has come to an end.

The Canadiens traded Kovalchuk to the Washington Capitals for a 2020 third-round pick on Sunday, ending the Russian winger's time in Montreal after 22 games.

"Ilya is a talented offensive player who we feel will provide us with additional depth and flexibility up front," said Capitals general manager Brian MacLellan. "He is a skilled forward who can make plays and contribute to our offensive game."

At the time of the trade, Montreal was six points out of a playoff spot, while the Capitals sat in first in the Metropolitan Division.

Kovalchuk is expected to be in the Washington area for the Capitals' morning skate Tuesday and play that night against the Winnipeg Jets. He's the fourth prominent Russian player on the Capitals, joining forwards Alex Ovechkin and Evgeny Kuznetsov and defenceman Dmitry Orlov.

Montreal has agreed to retain 50 per cent of Kovalchuk's salary and cap hit.

Kovalchuk had three goals and nine points over 17 games this season with the Kings, and another six goals and 13 points in 22 games with the Canadiens.

Kovalchuk, who was drafted No. 1 overall in 2001 by the Atlanta Thrashers, has also played for the New Jersey Devils amongst his 13 seasons in the NHL. He's also recorded 138 goals and 327 points in 298 career KHL games with SKA St. Petersburg.

The five-time Olympian has 11 goals and 27 points in 32 career NHL playoff games, while leading New Jersey to the Stanley Cup Final in 2012.