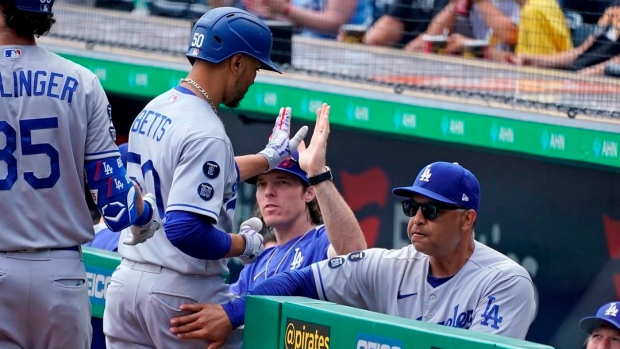 PITTSBURGH (AP) — Mookie Betts hit his 25th leadoff home run and added a spectacular catch and throw for a double play to lead the Los Angeles Dodgers over the Pittsburgh Pirates 6-3 on Thursday.

Betts took the third pitch he saw from Mitch Keller (3-7) and sent it into the bullpen beyond the centerfield fence for his sixth homer this season. He saved a run in the the second by making a running grab on a sinking line drive by Ka’ai Tom then doing a 360-degree turn before firing a one-hop strike to home plate to throw out Erik Gonzalez.

Julio Urías (9-2) allowed three runs and six hits in six innings to become the major leagues' first nine-game winner. Phil Bickford got his first save when the game was called with one out in the the eighth after a rain delay of 1 hour, 15 minutes.

BOSTON (AP) — J.D. Martinez hit his 13th homer, Christian Arroyo had a three-run drive and Boston capitalized on a pair of dropped balls in a five-run sixth inning to beat Houston, avoiding a three-game sweep.

Right fielder Kyle Tucker dropped Martinez’s sacrifice fly that tied the score at 8 for an error as the batter reached, and shortstop Carlos Correa let Rafael Devers’ bases-loaded pop to short center glance off his glove but got the out because an infield fly was called.

Yuli Gurriel and José Altuve homered for the Astros.

Giancarlo Stanton drove a slider off the end of his bat 422 feet for a three-run, first-inning homer off J.A. Happ, Gio Urshela also homered.

Chapman blew a save for the second time in 14 chances. This was just the third time Chapman allowed multiple homers in a game.

New York started an all-right-handed batting order for the second time since 1992 — the first was in Saturday’s loss to Boston.

The Royals finally got to Frankie Montas (6-6), who was crisp into the seventh with eight strikeouts and no walks. He was tagged for three runs — two earned — on five hits over 6 1/3 innings.

Minor (5-3) struck out eight and walked one while allowing three hits and one earned run over seven strong innings.

Jed Lowrie homered leading off the fourth, but that was it for Oakland.

Freedie Freeman hit a solo homer off closer Hector Neris with one out in the ninth to tie it, and the Braves scored two runs off José Alvarado (5-0) on a wild pitch and passed ball in the 10th.

Luis Castillo (2-9) gave up one hit in 5 2/3 innings. He left with a 2-1 lead after walking two batters in the sixth. Lucas Sims gave up Willy Adames’ run-scoring double and Peterson’s single.

Joe Jiménez (1-0) pitched a 1-2-3 seventh for his first win since last Aug. 26. Alex Lange threw the eighth and Gregory Soto pitched a perfect ninth to finish the six-hitter.

In a planned bullpen game, Alexander allowed one run and three hits in 2 2/3 innings and relievers allowed three hits over the rest of the game.

Seattle’s Justus Sheffield (5-5) gave up five runs — three earned — and six hits in four innings, the shortest of his 11 starts this season.

MIAMI (AP) — Starling Marté had four hits, including a homer and double, and Miami beat Colorado.

Adam Duvall and Jazz Chisholm also went deep, and Jorge Alfaro had three hits for the Marlins, who had 16 hits.

Marcus Semien and Lourdes Gurriel Jr. each drove in a run for Toronto, which lost for the fourth time in six games. Hyun Jin Ryu (5-4) pitched six innings of three-run ball in his second straight loss.

Keuchel (5-1) earned the win. Liam Hendriks worked the ninth for his AL-leading 16th save.