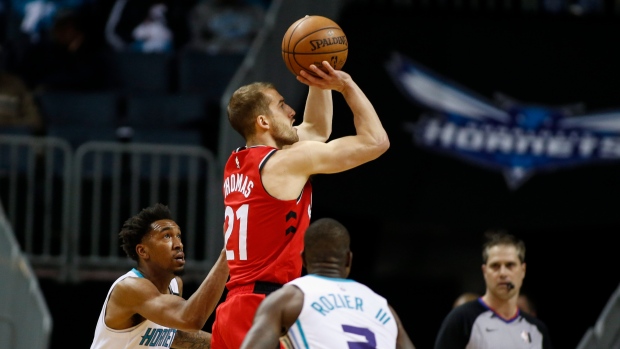 TORONTO – For a young sharpshooter like Raptors’ sophomore Matt Thomas, there isn’t a better player to study than J.J. Redick.

There are obvious similarities between the two. Like Redick, Thomas is one of the very best three-point marksmen on the planet. His coach, Nick Nurse, often compares him to the veteran guard in the way that he’s learning to move without the ball, come off screens, find separation and get his jumper off.

Redick and his 14, going on 15, seasons in the NBA represent the blueprint – proof that a specialist can carve out a long and impactful career in the league. However, there’s more to glean from Redick’s ascension than merely how he hunts shots.

For every success story there are countless shooters that haven’t made it – guys who were pigeonholed into situational roles and couldn’t break through in the league, or players that never even got their chance in the league. Before Toronto signed him ahead of last season, Thomas was playing overseas in Spain and waiting for his opportunity, like many others.

As great as Redick is at what he does best – he’s a 42 per cent career three-point shooter – he’s made it because he can do everything else well. Close out on him and he’s comfortable putting the ball on the floor and making plays for himself or for his teammates. And while he’s never been – and never will be – considered a great individual defender, he’s a capable and underrated team defender.

After playing sporadically as a rookie, despite shooting an impressive 48 per cent from three-point range, Thomas knows that diversifying his game is the path to earning more minutes in his second season with the Raptors.

"With last year being my first season in the NBA, coming from Europe, I didn't really have expectations with how the season was going to go," Thomas said. "I think a lot of the coaches and the front office probably didn't know exactly how the transition would work for me. And my role was up and down last season as well. I had games where I played 20 minutes and games where I didn't play at all, and all of that kind of fluctuated by whether or not guys were healthy, or how the games were going, different matchups, etc."

"When we went into the bubble [I was] in a good place mentally and physically. I think I played good basketball there. Now, it's time to use that momentum that I finished the season with last year to make a jump to being more of a consistent rotational piece on this team, a guy that can come in every single night and help the team get wins."

It appears as though he’ll get that opportunity. Heading into Saturday’s pre-season opener against Charlotte, Nurse indicated that his plan was to manage the rotation similarly to how he envisions it to start the campaign, at least in the first half. With sixth man Norman Powell starting in place of Kyle Lowry, who didn’t make the trip, Thomas was the first guard to check in off Toronto’s bench, and he didn’t disappoint.

The 26-year-old was a bright spot in the Raptors’ 111-100 win. He scored a game-high 16 points, which included four made threes on seven attempts, but it was some of the other areas of his game that turned heads.

Thomas recorded five assists – notable considering he never had more than two in a game last season. One of them came late in the first quarter, when he blew by Cody Zeller on a dribble drive, stopped on a dime and found OG Anunoby under the rim for an open dunk. In the second half he came off a pindown and was ready to shoot, but by reading the defence – and showing good court awareness – he threw a jump pass that set Yuta Watanabe up for a good look from three.

Those types of plays are crucial for his development. He may not be at the top of the opposition’s scouting report, but by this point the word is out – teams know he can shoot the ball. When he’s on the court, they’re going to be aware of him and try to run him off the line. That ability to read and react – to make the right decision, and to make it quickly – is the key to unlocking the next step in his evolution as an offensive weapon. As is his knack for cutting and moving without the ball, which was also on display against the Hornets.

"He makes more plays than just standing around shooting threes," Nurse said moments after the game. "He creates offence because he is doing the right thing. He’s more than just a shooter. He’s playing offensive basketball at a high pace and a high IQ."

"He’s a good player. He kind of gets this ‘he’s a shooter’, you know what I mean? He's a shooter, obviously, but he's also a good player. He cuts and he moves. He does the right thing on defense. He'll get overmatched once in a while size-wise or strength-wise or whatever. But I think for as much as he does at the other end, and his good decision-making at both ends, I’m wanting to lock him into a role this year where he's a big factor."

For most of last season and throughout the playoffs, Nurse kept the backend of his rotation fluid. Thomas was among the players that would see occasional, yet inconsistent, usage off the bench. This year, Nurse has said he’d like to solidify a regular eighth man coming out of camp and thinks that Thomas is one of the guys that would benefit from having a more defined role.

"I keep mentioning Matt as a guy that I kind of had in and out, not play for a few games then he’d play," Nurse said on Sunday. "Maybe someone like Matt, for instance, just becomes part of that group for sure every night. [That] gives him the best chance to improve, learn to play against different people, different schemes, etc. I just think he’s improved a lot and he’ll be able to improve more if I’m able to lock him in there."

However, Nurse has also indicated that the player who wins the eighth man gig – and maybe even the ninth spot in the rotation – in camp will be somebody that shows them something on both ends of the floor. That doesn’t necessarily mean those roles will go to the best two-way players. The implication is that he’s looking for guys that are going to play hard and a find a way to make an impact on offence and on defence.

At his size (six-foot-four) and with some of his physical and athletic limitations, compared to other players at his position, nobody is expecting Thomas to morph into a lockdown defender, but that’s also not a prerequisite. What they’re asking him to do is to continue getting comfortable as system defender – to know the scouting report and the game plan, to make the right reads and be in the right spots, to communicate and to bring effort and energy. He’s already shown that he’s capable of those things.

"For me, last year, coming in, it takes some time to adjust to the speed, size, athleticism of the NBA game [while] also learning our schemes and our defensive concepts and principles to the point where they're second nature," Thomas said. "Kind of going back to what I was saying, too, my role last year was so up and down, it was hard to get consistent minutes. That's hard too because the best way to learn is [through] experience. But defensively, that's definitely an area of focus for me. Teams are going to target me and they're gonna go at me, so I need to hold myself accountable, have pride in myself to go out there and get stops, stay in front of guys, and that's something I worked on all off-season."

"I think Matt is a good defender," said Nurse. "The only thing that happens sometimes is he gets a size issue or an over-powered issue. You end up switching onto a six-foot-eight guy or something and he’s got to fight like heck just because of his size. He does fight hard and he’s tougher than maybe he appears to be. He is certainly tough. He does all the team stuff. He does everything right. He is working hard and, again, if I can get him out there a little more consistently he’ll learn how to adjust, and we’ll also be able to run some schemes to keep him away from some of that stuff if we can too."

With four returning starters – Lowry, Fred VanVleet, Anunoby and Pascal Siakam – and Baynes completing the first unit, as well as Powell reprising his role as the first player off the bench, Nurse’s top-six appear to be set. There are minutes up for grabs after that, though.

Thomas has competition in the backcourt. Malachi Flynn and Terence Davis also played well in the exhibition opener, and Patrick McCaw could re-enter the mix once he’s fully recovered from the nagging knee injury that limited him last season. Still, it seems increasingly likely that Thomas’ opportunities will come early and more often in 2020-21, and if Saturday’s game is any indication, he plans to take advantage.​4