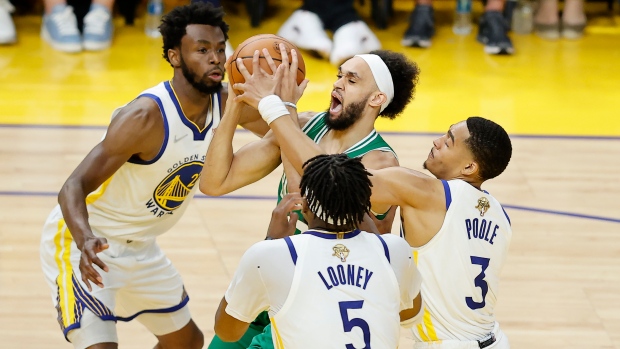 The Golden State Warriors have an opportunity to move within one win of an NBA championship on their home floor tonight.

For the Boston Celtics, it will be a chance to send the series back to Massachusetts one win away from a title.

When the NBA Finals is tied 2-2, the winner of Game 5 has gone on to win the championship 73 per cent of the time.

As someone who bet on the Celtics to win the series pre-flop, along with Game 1, Game 3 and Game 4, it was tough to watch Boston collapse in the final five minutes of Friday night’s game.

Will the Celtics bounce back again and take care of business in a hostile environment at Chase Center?

At this stage of the playoffs, it wouldn’t be a major surprise, but I have my doubts.

Celtics, Warriors Down To Best-Of-Three

The NBA Finals is down to a best-of-three.

Golden State is -150 to win the championship at FanDuel.

The trio of Stephen Curry, Klay Thompson and Draymond Green won their 19th NBA Finals game together on Friday.

With another win, they’d have the most Finals wins by an All-NBA trio in the last 50 seasons surpassing Tim Duncan, Tony Parker & Manu Ginóbili h/t @EliasSports pic.twitter.com/2IIl0WRSCZ

The Celtics have played 18 games since sweeping the Brooklyn Nets in the opening round of the playoffs.

We're embracing the challenge that lies ahead of us in Game 5. pic.twitter.com/xj1WaVxhEm

The Warriors are 10-1 at Chase Center this postseason, with their lone loss in Game 1 of the NBA Finals.

Meanwhile, the Celtics have looked like a much different team coming off a loss versus a win.

Boston is 3-6 coming off a win in the playoffs dating back to the second round.

The Celtics are 7-0 straight up and against the spread coming off a loss over that same span.

How does Boston bounce back in Game 5?

Per ESPN Stats & Info, the Celtics have held their opponent under 50 per cent shooting in 18 consecutive playoff games, the longest streak in a single postseason since 2010.

Stephen Curry looked unstoppable again in Game 4, but even still Boston led by five with under seven minutes to go before getting outscored 21-6 over the final 6:29.

He scored three points in the final frame.

The Celtics need to hit their free throws, avoid the awful turnovers that have plagued them in this series, and they need their best players to perform in clutch situations.

For as ugly as they’ve looked in their two losses, Boston has consistently bounced back this postseason and I think they can do it again tonight.

If you like the Celtics and you are thinking about taking the points, you might reconsider after seeing this unbelievable trend from Ralph Michaels.

A reminder that in the #NBAFinals when the spread is 6 or less.....

When the spread is six points or less in the NBA Finals, the team that wins is 72-0-2 against the spreads.

That includes a 4-0 run in this year’s series, as each of the first four games has been decided by 10+ points.

I’ll take Boston +142 on the money line, hoping that they can bounce back and improve to 8-0 SU and ATS following a loss this postseason.

I’ll also look for the auto-bet of the series: Warriors 3Q.

Golden State is 4-0 SU and ATS in the third quarter so far.

Meanwhile, the late start times for the NBA Finals games mean even more time for me to build Same Game Parlays at FanDuel.

Jayson Tatum: “I want to win by any means necessary and I’ll do whatever it takes. That’s all that I really care about right now is winning.” pic.twitter.com/9SeQvLu3Ly

Next, the “Andrew Wiggins please send Steph some help SGP”: Wiggins 15+ points and Wiggins 6+ rebounds at -112.

Andrew Wiggins on his game being more appreciated as he performs on a bigger stage in the #NBAFinals presented by @YouTubeTV. pic.twitter.com/wWgFjdOggV

Game 5 won’t tip off until just after 9 PM eastern time, which gives us more than enough time to get creative with some long shot FanDuel SGP’s before game time.

The Tampa Bay Lightning are four wins away from becoming the first team to three-peat as Stanley Cup champions since the New York Islanders won four straight in the 1980’s.

For the fourth time in as many playoff rounds, the Lightning will be an underdog to win their series.

FanDuel has Tampa Bay at +155 to win the Stanley Cup.

The Avalanche, which have gone wire-to-wire as the favourite to win it all at FanDuel, are -180 to win it all.

After going 5-0 with my series bets in the conference finals, I’ve yet to place a bet on the Stanley Cup Final.

However, I do have one pending bet that I made in the opening round.

.@DomPadulaEDGE made this bet when the Lightning went down 3-2 in the series to the Maple Leafs! 👀

Would you hedge it or let it ride? 💸 pic.twitter.com/fT07BDoQhf

CFL Scoring Up In Opening Week

The first week of the CFL season went down without any major surprises.

They went 2-2 against the spread.

Meanwhile, Week 1 scoring was up an average of 13 points versus Week 1 last season.

Despite the increase, there was an even split with the Week 1 totals at @FanDuelCanada.

After getting an even split on the totals, it will be interesting to see if FanDuel makes any adjustments to their totals for Week 2.

As for CFL futures market, we did see a couple of notable adjustments after the BC Lions beat the Edmonton Elks 59-15 in the most lopsided Game of Week 1.

Tonight in BC ⬇️

The Lions entered the season with the longest odds to win the Grey Cup at +1800.

The Winnipeg Blue Bombers remain the favourite to win the Grey Cup at +270 despite an injury to Zach Collaros.