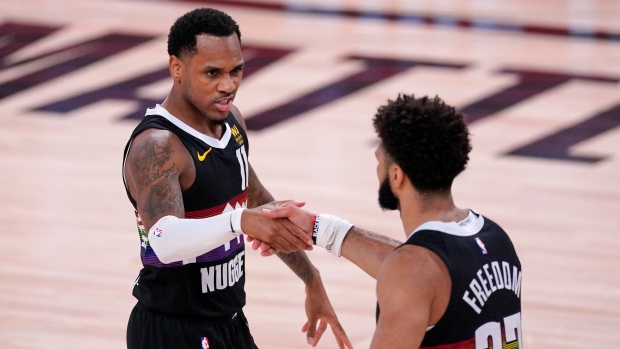 The Denver Nuggets entered Game 3 of the Western Conference final on Tuesday night in familiar territory.

Denver needed a win over the Los Angeles Lakers in order to avoid falling behind 3-0 in the series.

As was the case in their previous two playoffs series’, the Nuggets responded with their best effort in a 114-106 win. Denver improved to 3-0 this postseason when trailing by two games in a series.

Just like that, the Nuggets are right back in it.

Meanwhile, Jerami Grant stepped up with his best offensive performance of the playoffs, scoring 26 points on 7-of-11 from the field as Denver won and covered as 6.5-point underdogs.

After leading by as many as 20 points in the fourth quarter, the Nuggets nearly let this one slip away as the Lakers rallied with a 19-2 run.

However, Murray stepped up with a clutch three with just over two minutes left to extend the lead back to seven.

After setting up a Paul Millsap dunk on Denver’s next possession, Murray iced it with another three to extend the lead back to 12 with 53.3 seconds left on the clock.

Murray scored 25 points and created 25 points from assists for the first time in his NBA career.

Per ESPN Stats & Info, Murray is now 8-of-11 from three-point range in clutch time this postseason, which is considered when the score is within five points in the game’s final five minutes.

Murray’s 72.7 shooting percentage from beyond the arc in those situations would be the best such percentage ever tracked by ESPN Stats & Info on a minimum of 10 attempts in a single playoffs.

Jamal Murray continues to put on a show in the NBA playoffs and fans are loving it. 🔥

The Nuggets are the third team in NBA history with six wins when trailing in a playoff series.  Each of the previous two reached the NBA Finals.

Denver is still +1400 to win it all – the longest odds of the four remaining teams. The Nuggets opened as a six-point underdog for Game 3 on Thursday night.

Speaking of clutch performances, the Seattle Storm survived Game 1 of their WNBA semifinal series against the Minnesota Lynx thanks to a clutch put-back from Alysha Clark at the buzzer.

It took some late heroics just to win the game outright.

Meanwhile, a familiar face put the Las Vegas Aces on her back in the other WNBA semifinal on Tuesday night.

A’ja Wilson scored 29 points with seven rebounds and seven blocked shots in an 83-75 win over the Connecticut Sun in Game 2 of their series.

The league MVP took over when the game was tied at 75 with just over a minute to go. Wilson scored the go-ahead layup and the foul with 1:03 left. She made another basket with 29.2 seconds left on the clock to give the Aces a five-point lead.

TSN’s newest basketball analyst, Kia Nurse, discussed what stood out to her from both games, including what makes Wilson so difficult to guard.

Las Vegas won and covered as a 6.5-point favourite to even the series at 1-1.

Both WNBA playoff semifinals will resume on Thursday night.

Every year around this time I’m reminded that the pace of the NFL season is absolutely remarkable.

Before we even get a chance to digest everything we have seen from the previous week, Thursday Night Football arrives.

- Time To Hit The Wire

Congratulations if you survived Week 2 without an injury costing you a win. Thankfully, I managed to go 3-1 in my leagues.

The lone defeat was a 2.92-point loss after Will Fuller and Parris Campbell netted me a whopping 0.7 fantasy points combined.

With so many key injuries, make sure you check out Chris Amberley’s Scanning The Wire column and capitalize:

The thought of Campbell in the Keenan Allen-type role in a Phillip Rivers offence was so enticing I started him over Dallas Cowboys wide receiver CeeDee Lamb in that 2.92-point loss.

Lamb finished with 17.5 fantasy points in standard TSN fantasy football leagues. More on him in a minute.

With Campbell out, Michael Pittman Jr. stepped into that prime role and responded four receptions for 37 yards on six targets.

Pittman has the potential to put up big numbers with an increased target share.

The Colts host the New York Jets this week. Grab Pittman if you can.

Congratulations if you were smart enough to grab running back Devonta Freeman off the wire before he signed with the New York Giants.

Now isn’t the time to celebrate, though.

After watching what happened to Saquon Barkley over the first two weeks, I’m not buying the idea that Freeman is going to put up big numbers, even if he gets the bulk of the touches ahead of Dion Lewis and Wayne Gallman.

Now is the time to sell high on Freeman and get a decent return for a smart waiver wire pickup while you can.

The onside kick recovery that led to the Cowboys’ 40-39 win over the Atlanta Falcons gets more shocking to me every time I watch it.

The Falcons forced three turnovers and prevented two fourth-down conversions, only to blow the game with one of the worst special teams executions we will ever see.

That special-teams blunder overshadowed an incredible performance by Lamb, who had six receptions for 106 yards on nine targets.

The lack of preseason action didn’t help, but Lamb will only get better as he gets more comfortable in the Dallas offence this season.

He could very well become the best fantasy receiver option in the Cowboys’ offence sooner rather than later.

Now is the time to trade for him if you still can.

Big things were projected for Dallas tight end Blake Jarwin before he suffered a torn ACL.

In Sunday’s win, Dalton Schultz stepped into the starting lineup for the Cowboys and went for nine catches, 88 yards and a touchdown.

The matchups won’t be as attractive every week moving forward.

However, Schultz has sleeper potential as the starting tight end in a Dallas offence that should have plenty of scoring opportunities this season.