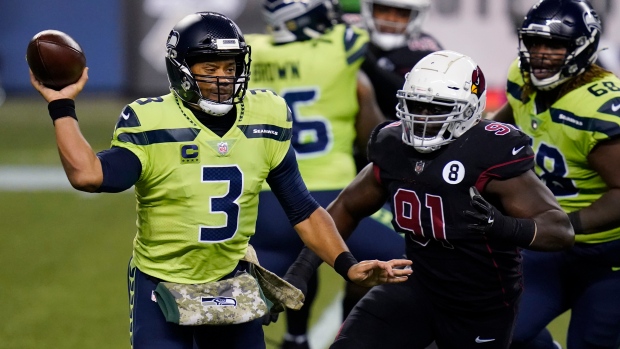 Russell Wilson and the Seattle Seahawks are back atop the NFC West.

At least for now, that is.

The Seahawks (-3) beat the Arizona Cardinals 28-21 on Thursday Night Football.

With the win, Seattle moved the one game up on the Cardinals and a half-game clear of the Los Angeles Rams for the best record in the best division in football.

Wilson improved to 19-3 straight up in home prime-time games since entering the NFL in 2012. He’s also won nine straight Thursday starts to improve to 9-1 on Thursday Night Football all-time.

More importantly, he didn’t turn the ball over after throwing seven interceptions over his previous four games, including three picks in a 37-34 overtime loss when these teams met back in Week 7.

Tyler Lockett hauled in nine catches for 67 yards and a score. Carlos Hyde ran for 79 yards and a touchdown in his return from injury.

Meanwhile, perhaps the most impressive aspect of the victory was the fact that the Seahawks defence was able to keep Kyler Murray and the Arizona offence in check.

Four days after connecting on an incredible game-winning Hail Mary touchdown pass to beat the Buffalo Bills, Murray and DeAndre Hopkins were held to just five completions for 51 yards.

In fact, Murray finished with just 269 yards on 42 pass attempts.  That includes going just 1-of-5 on passes thrown 15 yards or more downfield.

The Seattle defence had failed to register a single sack or quarterback hit on Murray the first time these teams met.

In the rematch on Thursday night, they sacked Murray three times and were able to consistently generate pressure all night.

With the victory, the Seahawks now stand alone atop the NFC West at 7-3.

Los Angeles will visit the Tampa Bay Buccaneers on Monday Night Football this week. The Rams are currently a +4 underdog at Tampa Bay.

A Hail Mary To Tie

On the same night the Cardinals couldn’t rediscover the magic that propelled them to a win over Buffalo, No. 25 Tulsa (-5) converted a Hail Mary of its own to force overtime and then beat Tulane 30-24 on a pick-six.

The Golden Hurricanes improved to 4-0 this season when trailing by 14 points or more, becoming the first team to accomplish that feat since 2005.

Most importantly, they managed to cover the five-point spread in dramatic fashion.

The worst was confirmed when it was announced Thursday that Golden State Warriors guard Klay Thompson would miss a second straight full season after he suffered a torn Achilles. The injury comes after he missed all of last year with a torn ACL.

It’s another terrible blow for a Warriors team that appeared primed to be a perennial championship contender following a five-year stretch in which they made the NBA Finals every season and won three titles.

Now the Thunder are trying to surrounded Stephen Curry with just enough pieces to force their way into the championship conversation, including finalizing a trade to acquire Kelly Oubre Jr. from the Phoenix Suns.

Golden State went from a +700 favourite to win the NBA title to +2200 odds following the Thompson injury news.

The defending NBA champions Los Angeles Lakers remain the betting favourite to win it all at +325 odds.