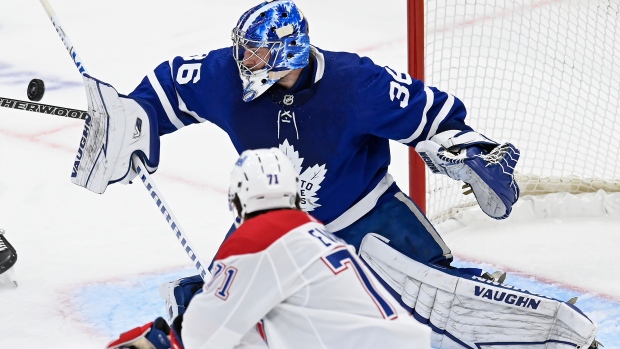 TSN Toronto Reporter Mark Masters reports on the Maple Leafs, who had an optional morning skate prior to Saturday's game against the Boston Bruins

Toronto Maple Leafs goalie Petr Mrazek, who returned from a groin injury just one week ago, is back on the shelf after aggravating the issue at practice.

"He's getting evaluated," said coach Sheldon Keefe. "We'll find out more tomorrow. He tweaked something the other day and wasn't feeling right."

Jack Campbell, who missed time with his own nagging groin injury last season, will start tonight against the Boston Bruins. It will be Campbell's 10th appearance already. Only Montreal Canadiens goaltender Jake Allen has gotten into more games this season, but there's no concern about Campbell's workload.

"I wouldn't call it a concern, because he's been really healthy and we've managed him well on off days and practice days," Keefe said.

Friday was a day off for the Leafs and Campbell was also given Wednesday's main practice session off.

"The schedule right now is pretty good in the sense that there's no back-to-backs coming up until the end of next week so we feel very comfortable just continuing with Jack," Keefe said.

Campbell emerged as Toronto's No. 1 goalie last season and is looking to prove he can carry the load over the course of a full campaign. He's never started more than 26 games in a National Hockey League season.

Campbell is off to a strong start this season with a 5-2-1 record and .932 save percentage. On Thursday, he came out on top in a goalie duel with the Tampa Bay Lightning's Conn Smythe Trophy winner Andrei Vasilevskiy.

"I didn't love my first period," Campbell told TSN after the 2-1 overtime win, "and that's an area that I'm trying to grow in is just [regroup and] shut the door and give the team a chance."

With the Leafs pressing for an equalizer late in the third period, the Lightning were able to generate some chances on the counter attack, including a Brayden Point breakaway.

"He's so good and he's fast and he kind of came in quicker than I expected," Campbell said. "I know he's got a great shot so I was trying to take it away and he made a nice move and just fortunate to make a save and then to have [defenceman Travis Dermott] to have my back and make the save on the rebound. I owe Dermy for that."

Chants say it all 🥣🗣#LeafsForever pic.twitter.com/D6PUR5nQB8

"After I lost my guy behind me, that's quite generous, Soupy," he said with a grin. "I was lucky enough to have that shot hit me, but if that first one went in, I'd be owing Soupy more than he owes me."

Campbell is a popular figure in the dressing room for being unfailingly nice and kind-hearted. Following Thursday's win, teammates serenaded their goalie with the same "Sooooooup" cheer that fans at Scotiabank Arena have shouted after big saves this season.

"He's an extremely motivated guy," Auston Matthews said. "He's so passionate. He wears his heart on his sleeve. I can't say enough good things about him."

Campbell, historically, has been his own harshest critic, but the 29-year-old has also shown, of late, that he's taken strides in managing his emotions and channeling them the right way. During training camp, he mentioned that he enjoyed chatting with  Greg Harden, the team's new peak performance coach.

"Soupy's been dialled in all season and pretty much since summer," noted Dermott. "A guy who's coming in ready to do his work every day and he's doing all the extra stuff too. He's taken the most out of every asset that we have in the organization."

Joseph Woll, who has yet to play in the NHL, was called up from the American Hockey League by the Maple Leafs and will dress as the back-up goalie tonight.

"We liked his camp and he is coming off of what was regarded as a really strong start for him," Keefe explained, "but also [Erik] Kallgren started yesterday and [Michael] Hutchinson is going to play today for the Marlies."

The Bruins have employed a tandem system in net so far this season with both Linus Ullmark (3-1-0, .927 save percentage) and Jeremy Swayman (2-2-0, .900 save percentage) starting four games.

"Our goaltending's coming along," said coach Bruce Cassidy. "Early in the year, our numbers got skewed. Some funny ones went in. Ullmark has got progressively better from training camp on. He probably had his best game the last outing so hopefully he continues to build on it."

Ullmark, who signed as a free agent with the Bruins last summer, gets the start tonight against the Maple Leafs.

"He's really trying to get to know us," said captain Patrice Bergeron. "He's asking a lot of questions about personal [things] and he's a very smart guy."

Keefe juggled his top two forward lines midway through Thursday's game against the Lightning reuniting Matthews with Mitch Marner and putting William Nylander back with John Tavares. But at Saturday's morning skate the lines were back the way they were at the start of the game against Tampa.

"I just think that those guys have done a good job," Keefe explained. "The other night wasn't really reflective of anything I've felt about the lines as a whole, it was just in the game there wasn't a whole lot happening. Particularly with the Tavares line, I thought they really needed a boost and, putting Willy there, I think we got that. That line ended up giving us some real good shifts."

Keefe split up Matthews and Marner, who played together all of last season, ahead of their 4-1 loss to the Carolina Hurricanes on Oct. 25. In the last five games, Matthews has started with Michael Bunting and Nylander while Marner has lined up beside Tavares and Alex Kerfoot.

"I want to give that a little more runway," Keefe said. "I foresee it being something that moves around throughout the season, but we'll stick with what we saw this morning here tonight."

Matthews has scored a pair of five-on-five goals while playing alongside Bunting and Nylander.

"We've progressed well over the last couple games," Matthews said. "We've definitely upped the compete level a little bit and just finding each other, sustaining a little bit more O-zone [time] and getting some good chances."

Saturday marks the first game between the Maple Leafs and Bruins since Nov. 15, 2019. Matthews has scored 77 goals in 109 regular season games since then and won his first Rocket Richard Trophy last season.

Cassidy outlined three keys for the Bruins in containing Matthews.

"Through the neutral zone we need speed above him," the coach said. "Our D have to stay connected in the middle of the ice.

"In zone, it's his release. He's able to get it off quick in the slot. We're pretty good at covering the slot, we're mindful of it no matter who we play, so that will come in handy tonight with him and Tavares and those guys with quick releases in that area.

"And then putting pressure on him to play in his end, forcing him to defend [and then] break out and go 200 feet. So that's a way we look at it as well. Let's deny him the puck and make him defend, first and foremost, expend some energy there. Beat him in the circle and start with the puck."

The Leafs lead the league in face-off win percentage (55.9) while the Bruins are third (54.9). Matthews is winning 55 per cent of his draws this season while Bergeron leads Boston at 63.1 per cent.

Defenceman Justin Holl will sit as a healthy scratch for a fourth straight game.

"In terms of him getting discouraged, he's in control of how he handles this and how he manages that," said Keefe, who touched base with the defenceman again today. "We didn't intend on him sitting this long, frankly, but that's just the way it's gone. The others have played well, the team has played well and had success. It's on him to stay engaged, continue to work and make sure when his opportunity comes he's ready to go."

Holl was a healthy scratch 71 times during the 2018-19 season, but grabbed a job in Toronto's top four early in the 2019-20 season. He played in that spot consistently until struggling early this year.

"He went through this a couple years ago and probably handled it better than anyone I've ever seen handle that in my career," said Dermott. "I don't have any doubt in Hollsy dealing with this and coming out on the right side."

The emergence of 22-year-old Timothy Liljegren, who has looked comfortable alongside Rasmus Sandin on the third pair, has led to a numbers crunch on the back end and that, in turn, has led to increased chatter about a potential trade.

"If something happens, it happens, but I'm in the blue and white now so that's where my heart is," said Dermott, who signed a two-year deal worth $3-million in the summer. "I love you Toronto media guys, but I feel like [rumours] can bounce off the walls so many ways. You don't know if something got misinterpreted or if there is something going on ... At the end of the day, there's been rumours in the past and I'm still here now."

Dermott has taken Holl's spot in the top four and now finds himself slotting in beside Morgan Rielly.

"Learning from Mo has always been up high on my priority list," the 24-year-old said. "Getting to play with him is quite an honour and a treat. He plays the game fast so keeping the pace up with him and trying to be there for him is something I'm working towards. I feel like the more games I get under my belt, the more comfortable I get with that."

During training camp, Keefe said the team is still looking for Dermott to take the next step in his development and prove he can handle greater responsibility.

"You're going to be playing against top lines more so you got to be cognizant of who you're out there with," Dermott said. "I got burned early last game. I have to be on my toes at all times."