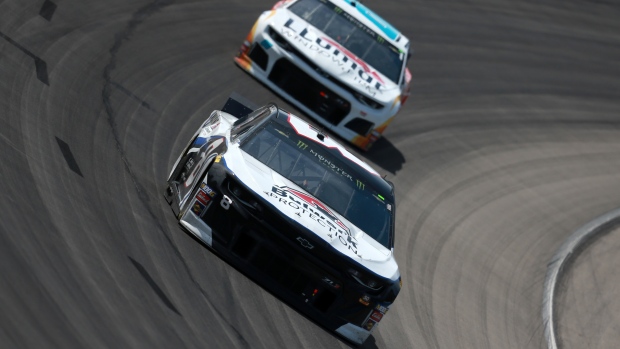 As it turns out, the third time was the charm for Chase Elliott.

After he was dealt late heartbreak in consecutive NASCAR Cup Series races, Elliott finally clinched his first victory of the season in the Alsco Uniforms 500 on Thursday night.

The 24-year-old became the third-youngest driver to win a Cup Series race at Charlotte Motor Speedway.

His seven Cup Series wins are the fourth-most all-time by any driver before they turned 25-years-old in Cup Series history.

He certainly had to work for it.

First, there was the late wreck at the Toyota 500 as Elliott battled Denny Hamlin for the outright lead on the final green-flag lap.

Then a couple of nights later at the Coca-Cola 600, Elliott had a nearly two-second lead with three laps to go when the final caution flag came out.

Crew chief Alan Gufstafson pulled him in for fresh tires – a move that ultimately cost Elliott another victory.

But the No. 9 Chevrolet wouldn’t be denied at Charlotte on Thursday night.

Elliott took the lead with 27 laps to go and never looked back.

So what’s next for Elliott and the Hendrick Motorsports team?

The Supermarket Heroes 500 from Bristol Motor Speedway in Tennessee is scheduled for this Sunday – the fifth Cup Series race in 15 days.

If he is going to double down, Elliott will need to beat out a familiar face that is currently the odds-on favourite to take the checkered flag.

Here is a look at the latest betting odds for the Supermarket Heroes 500.

The No. 18 Joe Gibbs Racing Toyota hasn’t made a trip to Victory Lane so far this season.

There is a good chance that changes this weekend.

Busch has won three of the last five races at Bristol, including last year’s Food City 500.

In fact, with the exception of a rare miss in the 2018 Bass Pro Shops NRA Night Race, Busch’s Average Finish Position at Bristol over the last three seasons is 1.75.

With four top-five finishes in eight Cup Series starts this year, it isn’t like Busch hasn’t looked like a contender at times in 2020, either.

At the very least, Busch deserves to be the betting favourite to win Sunday’s Supermarket Heroes 500.

It made sense when Truex was given the benefit of the doubt at a track he had dominated at in recent years as the favourite to win outright at Charlotte on Thursday night.

However, nothing he has done so far this season indicates he should be listed at such short odds to win the Supermarket Heroes 500 on Sunday.

The same is true for his recent track record at Bristol.

He is coming off a ninth-place finish as the favourite to win the Coca-Cola 600.

He also doesn’t have a top-five finish to show for his first eight starts of the season.

Until he proves that he has what it takes to win, there isn’t much reason to back Truex at such a short price.

In case you didn’t notice, Logano is at the top of the Cup Series standings through the first eight races of the year.

The No. 22 Penske Racing Ford led 42 laps at Charlotte on Thursday night en route to a sixth-place finish.

It’s no surprise that he has the third-shortest odds on the board for Sunday’s race.

Harvick is just the second driver in the last 25 years to finish in the top-10 in each of the first eight races of a Cup Series season.

However, Bristol hasn’t been kind to Harvick in recent years.

His 17.25 Average Finish Position over his last four starts here represents his third-worst AFP at any track over the last three seasons.

Still, he does have a pair of wins at Bristol including most recently in 2016, when he won the Bass Pro Shops NRA Night Race.

Considering how consistent he has been this season, Harvick should be in the mix of contenders to win again on Sunday.

What will Elliott have in store for an encore following his first Cup Series win of the season?

The No. 9 Chevrolet has been extremely consistent of late.

Minus a 38th-place finish after a late wreck in the Toyota 500, Elliott owns a 3.6 AFP over his previous other five starts.

After top-five finishes in two of his last four races at Bristol, Elliott is once again on the short list of contenders to win outright.

Like his younger brother, Busch is still looking for his first win of the Cup Series season.

Busch has recorded top-10 finishes in five of his eight starts.

He also has a strong track record at Bristol, including a victory in the 2018 Bass Pro Shops NRA Night Race.

In fact, Busch’s six Cup Series wins at Bristol are the second-most among all drivers that will compete this weekend.

The only driver with more? His brother Kyle, with eight.

At +1200, Busch is a decent value option to win this Sunday’s Supermarket Heroes 500.

*All Betting Information appears as listed by Bodog on Friday, May 29, 2020.