Could both home teams walk out as winners this Sunday?

No one will mistake the 2021 Toronto Argonauts for one of the great teams of our time, no matter what happens from this point forward.

But in this Canadian Football League season of mostly ordinary play, the Argonauts managed to float their boat to the top of the East, which means hosting Sunday’s division final against the Tiger-Cats for a berth in the 108th Grey Cup game in Hamilton on Dec. 12.

The Tiger-Cats are rare betting road favourites at playoff time, especially given that they lost their three most recent meetings to Toronto during the pandemic-shortened 14-game regular season. All of which suggests that the public is still warming up to the notion of the Argonauts as Grey Cup contenders.

It’s easy to make the case that the Argos hosting the East Division Final is the biggest surprise of the CFL season.

That’s partly based on considering where they began, coming off back-to-back 4-14 seasons and housecleaning of the front office, coaching staff and roster, including a new head coach in Ryan Dinwiddie for the third season in a row.

There are fewer than a dozen Argonauts who were with this team in 2019. And while tearing down a roster so dramatically usually means a slower rebuild, the Argonauts took advantage of the league’s modern age of virtually limitless free agency to shorten that curve by recruiting the right mix of CFL veterans and talented newcomers to the league.

In the modern age of the CFL, it really is possible to rebuild a team in one off-season. Thanks to the COVID-19 pandemic resulting in the cancellation of the entire 2020 season, the new Argo brass had two.

That said, there’s been little to suggest during the regular season that this Argo team was a champion in the making.

Despite what a 9-5 record suggests, the Argos scored fewer points than they surrendered and ranked in the lower half of the league in both points for and against.

Winning five of their games by a total of 10 points speaks either to their inflated place in the standings or their ability to win in the clutch. Take your pick.

The Argonauts often played up or down to their opponents during the regular season, narrowly defeating Ottawa in their final meeting, yet racking up a 5-2 record against Hamilton, Calgary and Winnipeg.

One of those wins, a 31-12 win over Hamilton on Nov. 12, locked-up first place for the Argos with a strong statement.

Still, it’s been tough to get a sense of what this team really is or what its identity should be. All that new blood, and the many changes over the course of the season have made it impossible to put a finger on that kind of thing.

On offence, McLeod Bethel-Thompson wasn’t even named the full-time starter until past mid-season. And on defence, the coordinator switched from Glen Young to Chris Jones in September, for non-football reasons.

This Argonauts season felt at times like one long training camp, with players shuffled in and out of the lineup, a whirring turnstile of new faces, as the team continued to tinker from week to week.

Have they learned enough about what they are to beat Hamilton for a fourth time this season?

The public says no.

But these Argos, far from the limelight in the busy Toronto sports scene, have a way of sneaking up on people.

Sunday’s matchup between Hamilton and Toronto is just the second time these two teams have met in the East Division Final since 1986! In a four-team division, that seems like a huge statistical improbability.

It also speaks to how rarely the Argonauts and Tiger-Cats have had good teams at the same time.

Out West, the story is similarly unlikely.

The Winnipeg Blue Bombers and Saskatchewan Roughriders are facing each other in the West Division Final for the second season in a row and the second season since 1972. Which is also the last season Winnipeg hosted the West Final, just a few weeks after “Henderson has scored for Canada.”

Consider the odds in a nine-team league with two divisions.

My TSN colleague Marshall Ferguson tweeted out this photo this week and I just thought it was magical. 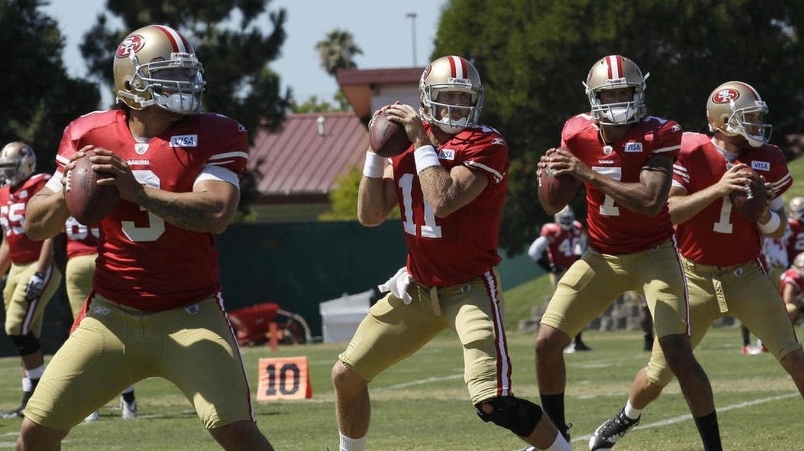 Taken some time in 2011, the caption today should read, “the two starting quarterbacks in the 2021 CFL East Division Final, the most controversial athlete of his time, and the former No. 1 overall draft pick.”

The photo was taken in Kaepernick’s rookie season, long before anyone understood how quickly he would ascend to football fame. Smith moved on from San Francisco after 2012 and finished his career with Kansas City and then Washington.

Masoli played in 2011 with Omaha of the defunct United Football League, before signing in the CFL with Edmonton in the spring of 2012. Edmonton then traded him to Hamilton before the 2013 season where he slowly ascended up the depth chart.

Bethel-Thompson also played in the UFL, spending 2011 with the Sacramento Mountain Lions. He would make six more stops in the NFL, including two more for the 49ers, before signing a CFL deal with Winnipeg in the fall of 2016.

He was released by the Bombers and signed by Toronto before the 2017 season, where it’s taken him four years to claim the No. 1 job this season.

Two players who are still playing the game, and two who are no longer doing so.

A snapshot of the beginning of the road for two quarterbacks who square off in Sunday’s East Division Final.

It’s worth noting the difference between the way two professional football leagues handled the issue of players misleading teams about their vaccination status.

In the CFL, Edmonton’s Jacob Ruby was released and then banned by the league for the rest of the 2021 season. In the NFL, three players this week were handed three-game suspensions.

Some might say it’s an accurate reflection of the differences in Canadian versus American attitudes towards the risks associated with the coronavirus. Some would be right.

The Montreal Alouettes had one of those seasons you can see any way you like.

On the one hand, they dropped one place in the East Division and failed to win a playoff game for the second season in a row. They took far too many penalties and there were some in-game coaching decisions that didn’t look great as well.

They also managed to survive the loss of both their first and second-string quarterbacks, make the playoffs for the second consecutive year and controlled their playoff game for a quarter before their offensive line couldn’t keep the Tiger-Cats’ front-four at bay.

The lack of overall progress and the fact that general manager Danny Maciocia didn’t hire his head coach, Khari Jones, led to all kinds of speculation in the Montreal media about a potential coaching change.

It was clear during Thursday’s end-of-season media session that such a move is not in the works.

But that still leaves Jones in a precarious position should Montreal get off to a slow start next season, given that he will be in the final year of his contract.

As for the quarterback situation, it felt a tad strange that there was no public commitment to Vernon Adams, the incumbent who suffered a season-ending injury on Oct. 11.

At the time Montreal traded for Trevor Harris as insurance, it was strictly as a rental. So why wouldn’t the head coach or GM publicly commit to Adams at season’s end?

The answer has to do with money.

With continued downward pressure on the quarterback market, Montreal is likely to try to renegotiate Adams’ contract down from the more than $500,000 he is due to make next season.

Having an option at quarterback strengthens their position. As soon as they commit to one quarterback over another, that leverage disappears.

Could Montreal keep both? Not likely, unless there was nowhere else for Harris to be starter, and would require a decent paycut for Adams.

So don’t expect to hear who Montreal sees as its starter next season until the two sides get to putting pen to paper.

As for where the CFL quarterback market is heading, let’s go back to the off-season leading into the 2019 season when three of the league’s top quarterbacks all hit the open market at the same time, with two of them changing teams.

Mike Reilly went from Edmonton to BC on a four-year contract worth $2.8, setting an era standard for top-of-the-market quarterback compensation, an amount that was also bestowed by Calgary upon Bo Levi Mitchell.

Harris moved from Ottawa to Edmonton for $550,000 per season which had been about the old ceiling.

The domino affect of all of that pushed up quarterback salaries across the league. And with the minimum salary increasing by almost 20 per cent as part of a new CBA, it put the squeeze on other veteran players.

So how have those top-of-the-market contracts worked out? Not so well.

The Lions have missed the playoffs both seasons with Reilly as their No. 1 while Calgary has yet to win a playoff game since Mitchell signed his big deal. Harris is 1-2 as a playoff quarterback but was effectively kicked to the curb by Edmonton mid-season.

All of that has teams questioning at what point are they paying too much for premium quarterback talent.

Another factor affecting the market is that more and more teams are thinking of the QB position as a two-player role, since over the course of the season most teams end up starting two quarterbacks.

Investing in two quarterbacks means paying your starter less, something Calgary will have to contemplate if they intend to retain Mitchell’s backup, Jake Maier, past this season.

Then there is the uncertainty over the CBA and where the league’s economics will land in 2022.

During the pandemic, CFL teams opted to reduce spending on salaries by roughly $500,000 per team by setting budgets near the bottom of the range negotiated under the CBA.

As a result, the game’s highest-paid players all took haircuts, as they had the most to trim.

As a whole, with offence and scoring down this CFL season, few quarterbacks have stat lines to negotiate for raises, putting more power in the hands of teams.

We also have to consider the laws of supply and demand.

Virtually every quarterback in the CFL is either a pending free agent or will be able to become a free agent by virtue of being asked to renegotiate his contract for next season.

That’s going to give teams lots of options. And with so many quarterbacks having been injured the past two seasons, that’s created a greater number of quarterbacks who now have playing experience.

There still won’t be enough good quarterbacks to go around, but the fact so many are going to be available should put a further drag on salaries.

My estimates are that the league’s top quarterbacks will wind up earning salaries in the $450,000-$500,000 range, which would represent a market correction based on multiple factors.

Which is about where it should be.