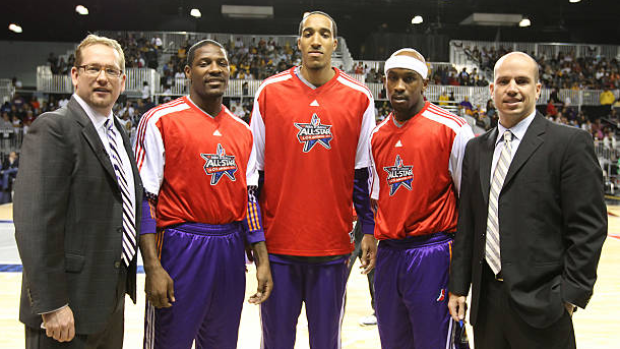 They were facing the Lakers in Los Angeles at the beginning of November – a game they would end up winning despite being undermanned – and Nick Nurse had just won his first-ever coach’s challenge, having started the year 0-for-6. The Raptors head coach celebrated as if he thought it might never happen, hugging everybody on his staff and a fan sitting to the right of the bench.

When he got to Nate Bjorkgren, a fellow Iowan and Nurse’s long-time confidant, the assistant coach reluctantly obliged but cut the embrace short, motioning over to the court as if to say, “Okay, great, but we still have a game to play.”

Bjorkgren, 44, is widely regarded as the team’s pillar of positivity. He’s almost always jovial and upbeat. But here, in this moment, he was locked in and making sure to keep Nurse on his toes. Knowing when and how to balance out the head coach is part of the job as an assistant.

“He’s the guy sitting next to me when I’m sensing disaster going on in a game and he’s saying, ‘We’re gonna win, we’re gonna come back, we’re gonna do it,’” Nurse said. “That helps me out quite a bit.”

Nurse and Bjorkgren complement each other well. They’ve had plenty of practice over the years.

They met in 1994. Nurse, 27 at the time, was an assistant coach at the University of South Dakota. Bjorkgren, a 19-year-old point guard, walked onto the team and was playing for him. Bjorkgren still had a full head of hair, Nurse jokes now.

“Good looking young kid,” Nurse said. “Not a bad player either. He ran the team, played hard, knocked down the open shot.”

Bjorkgren knew of Nurse even before they met. He remembers going to watch Northern Iowa play for a state title when he was 10 and Nurse was a freshman on that team. Nurse was from Carroll, Iowa. Bjorkgren grew up an hour away in Buena Vista.

But, in the mid-90s, basketball took them in different directions. Nurse spent the next 10-plus years leading teams overseas, while Bjorkgren transitioned to coaching, honing his craft at the high school level in Arizona.

Nurse returned to Des Moines in 2007 to coach the expansion Iowa Energy of the NBA D-League, now known as the G League. Bjorkgren had always wanted to get into pro basketball, so he got in touch with Nurse to see if there was a job for him there – and he was persistent.

“I was emailing and calling and knocking on the door because I wanted that opportunity to coach pro players,” said Bjorkgren.

The problem was that Nurse already had an assistant – Gary Garner – on staff. The budget in the D-League was extremely limited in those days, so he didn’t have the funds to pay another. Instead, he brought Bjorkgren on as an unpaid volunteer. In his second season, he made $500. In Year 3, he got $2,500. Then, when Garner left ahead of his fourth season, Bjorkgren’s salary was bumped up to $25,000.

Bjorkgren worked as a part-time gym teacher to pay the bills during those first few years.

“I had a great principal that would let me do all the morning duties and all the lunch duties so I could get out of there at 12:30 [in the afternoon] to go to practice,” he said. “I’ll never forget it. And then after school sometimes, I’d hop in my car and drive to the road games.”

Nurse wasn’t sure what he was getting when he first hired Bjorkgren – he had only worked with him as a player up to that point – but he would come to appreciate the young man’s dedication in a hurry. Some days they would spend up to 18 hours together, often poring over game film at Bjorkgren’s apartment late into the night.

“It was pretty evident pretty quickly that he was gonna be a really good basketball coach,” Nurse said. “His care level was [high] and the biggest thing is he’s a super positive guy.”

“I knew [Nurse was destined to be an NBA head coach] many years ago, from when I was his volunteer assistant,” said Bjorkgren. “[He’s] very creative. He has an unbelievable feel and a pulse for the team; he feels how the team feels. I think that’s number one in coaching, just having that feel. He just pours his heart into it.”

The two coaches developed a great working relationship and a close friendship. Nurse was even in Bjorkgren’s wedding party.

After coaching in the D-League for six years, Nurse was hired to be an assistant on Dwane Casey’s staff with the Raptors in 2013 – his first NBA opportunity. Meanwhile, Bjorkgren would get his own head coaching gig in the D-League before joining the Phoenix Suns as an assistant in 2015. In 2017, after leaving the Suns, he did some advanced scouting work for Toronto.

When Nurse was named the Raptors’ new head coach ahead of the 2018-19 campaign, Bjorkgren was his first hire. This time, Bjorkgren didn’t have to pester Nurse with calls and emails, and he certainly wouldn’t need to subsidize his salary with a second job. He was a welcomed addition.

“Nate is the [expletive] man,” Kyle Lowry said. “He's always that positive, happy go-lucky [guy], always looking at the plus side, not looking at anything negative. We need that.”

“I think Nate’s fun,” said Pascal Siakam. “I hear him all the time in my ear talking about something. Every morning he’ll say hi to you and give you a dab. He’s present and I think his energy is felt and needed on this team. He’s a great guy to have, a great coach, and somebody who is a likable person and so serious about his job.”

After leading their hometown Iowa Energy to a championship and coaching in three all-star games together in the D-League, Nurse and Bjorkgren have picked up right where they left off, albeit on a much larger stage.

In June, they helped lead the Raptors to their first ever NBA title. This coming weekend, they – along with the rest of Toronto’s tight-knit coaching staff – will represent the organization at the NBA All-Star Game in Chicago.

They’ll coach the team captained by Milwaukee Bucks superstar and reigning MVP Giannis Antetokounmpo, with Siakam and Lowry also on the roster.

It’s a dream come true for the two Iowans, who would often speak about what it might be like to experience an all-star weekend. Nurse was there as an assistant under Casey back in 2017, but returning as a head coach, with Bjorkgren and his hand-picked staff, will be special.

That it’s in Chicago is also meaningful. Nurse was born with a deep connection to the city. His late father, Maury, was stationed there, at Navy Pier, at the end of the Second World War. Growing up, Nurse and his family would often make the five-hour drive from Iowa to visit his sister – who was living in Chicago – and, as he got older, to watch Michael Jordan and the Bulls. He’s also a huge Cubs fan.

During the summer, Nurse got to live out another life-long dream. Alongside Bjorkgren and the rest of his staff, he brought the Larry O’Brien trophy to Wrigley Field, where he threw out the first pitch at a Cubs game and then led the seventh-inning stretch. Both Nurse and Bjorkgren expect to have plenty of family and friends in attendance for Sunday’s game.

Nurse enters the break with a record of 98-39 as an NBA head coach, making him the league’s all-time leader in winning percentage. His Raptors are 40-15, having won 15 of their last 16 games, and sit second in the East. Their success, despite losing Kawhi Leonard over the summer and dealing with an endless string of injuries to key players, makes him the early favourite for Coach of the Year honours.

Still, if you ask him, that’s a credit to his entire staff – Bjorkgren, Adrian Griffin and Sergio Scariolo (who will be away coaching the Spanish national team over all-star weekend) at the front of the bench, as well as Jim Sann, Patrick Mutombo, Jon Goodwillie and Brittni Donaldson, among many others talented contributors. Nurse is confident that many of them will be NBA head coaches one day.