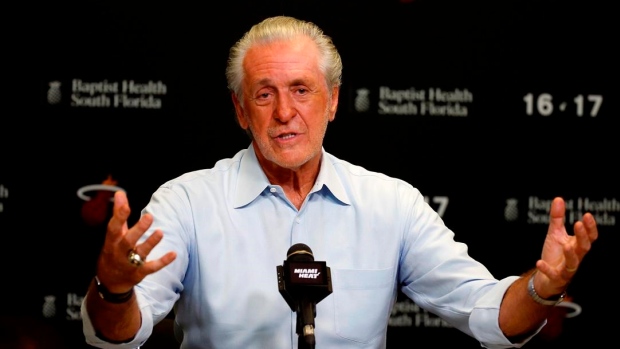 The NBA fined Miami Heat president Pat Riley $25,000 on Wednesday for violating the league's anti-tampering rule after the 76-year-old made comments regarding superstar LeBron James of the Los Angeles Lakers during a radio show on June 4.

The following was released by the NBA. pic.twitter.com/TkLd0pafJH

Riley mentioned that he would be open to James returning to the Heat some time in the future.

"I would leave the key under the doormat if he would call me and let me know that he's coming," Riley said while on the Dan Le Batard's radio show. "I would do that, but I doubt very much that key…That key is rusted now.

"LeBron, look, he's one of the greatest of all time, and for four years down here, if we want to go back and remember what those four years were like, it was four years in the Finals, four years of excitement, two world championships…It was the best time for the Heat. So I wish him nothing but the best, and if he ever wanted to come back, I'll put a new shiny key under the mat."

Riley has captured nine NBA titles over his long career as a player, coach and as an executive, including in 2012 and 2013 when James was a member of the Heat.

After losing to LeBron and the Lakers in the NBA Finals last year, the Heat were eliminated by the Milwaukee Bucks in four games in the opening round this season.