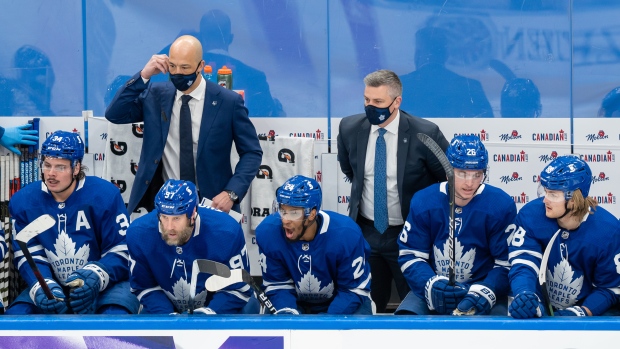 TSN Toronto Reporter Mark Masters reports on the Maple Leafs, who practised in Edmonton today ahead of Saturday night’s game against the Oilers.

Last season, the Leafs relied heavily on one stacked unit featuring Auston Matthews, John Tavares, Mitch Marner and William Nylander. This year, Matthews and Marner are anchoring one unit with Nylander and Tavares on the other.

"He felt confidently enough that that's what he wanted to go with and I supported him in that," said Keefe. "It's really been his vision and he's leading the way in communication with the players. He's given them great ownership of it in seeking their input and also having them feel empowered to go out and use their skills within the structure he's provided."

Toronto is converting on 43 per cent of its chances this season and is tied with Colorado for the most power-play goals (12).

"The results are encouraging," Keefe said. "We know that penalty kills are going to continue to get better and get tighter and goals will be harder to come by, but we're definitely off to a good start."

The power play success has helped the Leafs overcome their lack of discipline. Only Vancouver (48) has been shorthanded more times than Toronto (37).

The Leafs were whistled seven times on Thursday with Alexander Kerfoot the culprit on three occasions.

"The standard changes year to year and it's just a matter of us adapting," the third-line centre said. "The refs are going to call the game however they want and that's their job. They have a tough job themselves and we have to learn from whatever it is they're going to be calling on a nightly basis and do a better job to not take penalties."

It was clear early on Thursday night that officials Graham Skilliter and Chris Schlenker were going to call things tight.

"It's less about the standard and more about us being disciplined," Kerfoot said. "We've been taking more penalties than the other team in the majority of games so you don't just get that unlucky that many games in a row. We're doing something wrong and especially me last game. I got to be a lot more disciplined that that."

The Leafs have watched their opponent earn more power plays in five of the last seven games.

On Tuesday night in Calgary, Mikko Lehtonen logged just over 13 minutes in his third career NHL game. It was a big boost from his first two outings when he played six minutes and 41 seconds and then eight minutes and 34 seconds.

"It was good," Lehtonen said. "I think I played good and felt good on the ice so just can't wait to play more. It went well."

But the 27-year-old KHL import didn't see the ice much down the stretch against the Flames.

"We are still in that stage where I am getting a feel for what he can bring," Keefe acknowledged after that game. "I am really confident and comfortable with him on the power play. There is no doubt about that. At even strength, there is a lot for us to still find out in terms of how he can handle different match-ups and how much we need to protect him and give him an opportunity to really adjust to the league, to the pace and the competition. I would still say we are uncomfortable [with him]. If he were speaking honestly, Mikko is probably a little uncomfortable, too."

The adjustment to the North American game, of course, hasn't been easy and the lack of exhibition games this year didn't help.

"You have to be able to move the puck quicker and don't keep [it] that much," Lehtonen said. "I try to make good passes right away. A little bit quicker game."

Lehtonen has leaned on some veteran teammates to help him get through the growing pains.

"We have a lot of great guys on the team so hard to say one, but I have talked a lot with [Jason] Spezza. He has helped me a lot. He's an older guy and knows how the business is running here and all the things in North America. He's being really kind for me and helping me every day. He's been awesome for me ... It's not every time about the hockey. It's living in Canada or whatever, like, all around."

Lehtonen, as you would imagine, is missing his friends and family back home in Turku, Finland. What else is he missing?

"We have really dark [rye] bread called ruisleipä in Finland and we can't get it from here," he said with a smile.

Lehtonen, like on Tuesday, will start the game paired with Zach Bogosian.

"He helps me a lot with talking a lot on the ice and making the simple play," Lehtonen noted. "He's been good for me."

Bogosian has been good for a lot of Leafs this season adding a physical element to the back end and soaking up a lot of penalty-kill minutes (2:30 per game). Fresh off a Stanley Cup win, Bogosian hasn't been shy in the room.

"The biggest thing is personality," observed Keefe. "What he brings every day is good energy. He's a very confident guy and fits in and gets comfortable quickly. Right from the first day in the building you kind of felt his presence there. He deals well with all the players regardless of age and status. He interacts well with everyone, coaches just the same. On the ice he’s a reliable penalty killer. He's a competitive guy so all those things bring lots to us for us for sure within that D core. He's got lots of parts of his game that complement the rest of the group really well."

After allowing nine goals in his first two starts, Frederik Andersen is 4-1-0 with a .919 save percentage in his last five outings.

"I really feel like he’s settled into the season really well here," noted Keefe. "With no exhibition games it's tough on the goaltenders to find that rhythm and get comfortable again in the net in a game setting so I think he’s settled in. He looks like he's in a nice groove. He looks really comfortable and confident in the net. I think we’ve done a real good job of protecting him at five-on-five and reducing the number of odd-man chances and really egregious chances against yet when we’ve had breakdowns he’s been there."

Justin Holl will look to celebrate his 29th birthday with another strong effort tonight. The late-blooming defenceman logged a team-high 24 minutes and 50 seconds on Thursday night.

"He's a little more confident with another year of experience," said partner Jake Muzzin earlier this week. "You learn players, you learn systems more and he's just come in ready. He looks good physically and he's coming into his own right now."

"A year makes a lot of difference," Holl agreed. "I like being in this position a lot better than the position I was in last year. And it doesn't mean that I feel comfortable in my position or anything like that. I don't think anybody in this league feels comfortable with where they're at."

Last year, Holl emerged as an every-day NHLer helping solidify the right side of Toronto’s blue line. The previous year he sat as a healthy scratch 71 times.

"He's a guy who just worked extremely hard to gain his role on this team and his teammates are extremely happy for him," said fellow defenceman Morgan Rielly. "Each and every night more and more people are realizing just how important he is, just how good he is and he's a huge part of our team. Going back to last year and what happened the year before that, it was all hard work and he's just a guy that enjoys a challenge."