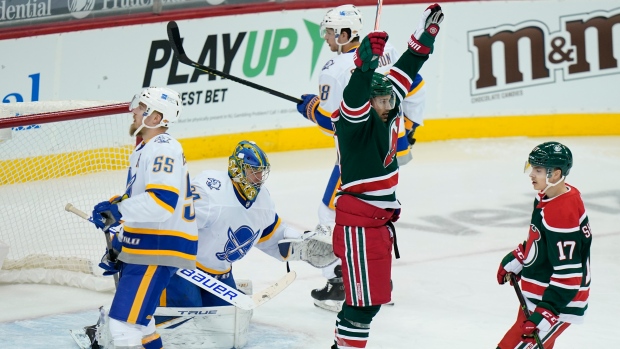 NEWARK, N.J. — Miles Wood scored the tiebreaking goal on a power play early in the third period and the New Jersey Devils beat the Buffalo Sabres 3-2 Tuesday night in a matchup of skidding teams.

Yegor Sharangovich and Sami Vatanen also had goals as the Devils ended an 11-game losing streak (0-10-1) on home ice. Mackenzie Blackwood made 33 saves.

“They made a push there in the third period and we didn’t break,” Wood said. “We stuck to the structure that was in place and we bought into that. Four lines, six D and Blackwood played well in net, that’s what it takes to win.”

Tobias Rieder and Jeff Skinner scored for Buffalo but the Sabres lost their 12th straight (0-10-2), the third-longest slide in franchise history. Jonas Johansson stopped 23 shots in his sixth start of the season.

“It was an excellent effort but we are not rewarded for effort, we are rewarded for results,” Sabres coach Ralph Krueger said. “Very painful at the moment. Frustrating. Opportunity was there. … We came here to win, and we didn’t get it.”

Wood redirected Jesper Bratt’s shot from the point at 4:52 of the third for his team-leading ninth goal. P.K. Subban also assisted on the play.

“I’ve asked a lot of him and he’s responded,” Devils coach Lindy Ruff said of Wood’. “I still think there’s more upside to Miles’ game but the speed that he brings, and the way he can create chances on his own, it’s a tool that a lot of players just don’t have.”

Sabres forward Eric Staal had two opportunities to score a late equalizer, but Blackwood came up with his two best stops of the night in the final minute.

“Everyone did a great job digging in for each other and making up for one play here, one play there, trying to block shots and boxouts,” Blackwood said. “It was good to see.”

Wood failed to corral a bouncing puck in his own zone and Rieder quickly fired a shot from the right circle past Blackwood.

Skinner added his second of the season with a nifty forehand-backhand manoeuvr prior to roofing the puck at 7:10. Buffalo defenceman Brandon Montour started the sequence with an impressive outlet pass as the Devils were changing. Casey Mittelstadt also assisted on the play.

Vatanen tied it with a wrist shot from the blue line while Nathan Bastian screened Johansson at 10:39 of the second. Janne Kuokkanen extended his point streak to five games with the primary assist.

Sharangovich opened the scoring with a wrist shot from the slot at 17:40 of the first period. The 22-year-old forward has six goals this season and extended his point streak to three games. Damon Severson and Travis Zajac assisted.

Before the game, New Jersey announced that captain Nico Hischier had surgery Monday to repair the frontal sinus fracture he sustained Feb. 27. Hischier is expected back in approximately three weeks.

The Sabres and Devils both wore their reverse retro jerseys.

Buffalo wrapped up its eighth set of back-to-back games this season. The Sabres are 2-6-0 in the first game and 1-7-0 in the second.