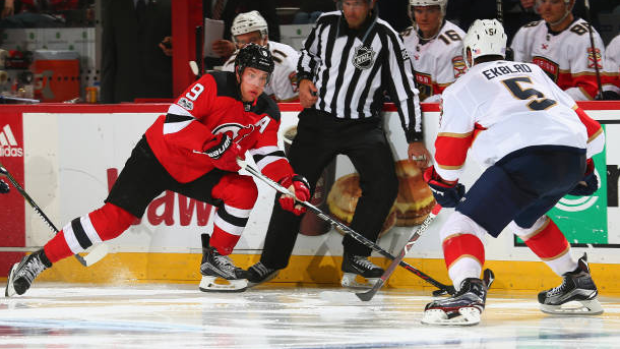 According to TSN Hockey Insider Pierre LeBrun, the Florida Panthers no longer appear to be in the mix for Taylor Hall.

LeBrun notes the Panthers' interest in the New Jersey Devils was believed "to be tied to the idea of signing him or at least thinking they could eventually sign him." The cost is otherwise seen as too high for a rental player.

LeBrun adds, however, that the Panthers could re-enter the sweepstakes if the Devils' asking price comes down.

now if the price lowers... maybe Florida could get back, that's why you never say never. Overall, have heard from other teams who hope to get an answer soon from NJ as to where this is headed. They don't want it to drag on too long

Hall has sat out the Devils past two games for precautionary reasons in anticipation of a trade. LeBrun reported Saturday that five-to-six teams were in the mix to land Hall, including the Panthers.

LeBrun reported earlier on Monday that the Devils are willing to retain salary on Taylor Hall in order to maximize their return in a trade. He shared that detail while replying to a tweet from Edmonton Journal writer Jim Matheson, who noted the Oilers have only $1.14 million in cap space and would have to shed salary to add Hall.

Devils are willing to eat some of Hall's contract, FYI... which makes sense for them to do to maximize the return

Hall has six goals and 25 points in 30 games with the Devils this season. He was limited to 33 games last season due to a knee injury, posting 11 goals and 37 points.

The 28-year-old won the Hart Trophy in 2018 after scoring a career-high 39 goals and 93 points in 76 games and leading the Devils to a playoff berth. He posted 41 points more than the team’s next leading scorer that season.

A pending unrestricted free agent, Hall carries a $6 million cap hit in the final season of a seven-year deal signed with the Oilers in 2012. He was selected first overall by the Oilers in 2010 NHL Draft and was traded to the Devils in 2016 in a one-for-one trade in exchange for defenceman Adam Larsson.

TSN Edmonton Bureau Reporter Ryan Rishaug remains skeptical of a reunion between Hall and the Oilers, noting Edmonton does not want to pay a premium for the winger, which could include Philip Broberg, Evan Bouchard or a first-round pick.

My sense on Hall remains the same as before. Oilers won’t want to pay premium for him (Broberg/Bouchard/1st rounder) so they’ll wait to see if prices drop over time and if so, will try and find a deal. Just don’t see them mortgaging much for A level futures at this stage.

Rishaug adds he believes the Oilers are more likely to target a third-line centre ahead of the trade deadline.

I still maintain that a quality 3rd line Centre remains a more realistic target, and a greater need for the club at this time.