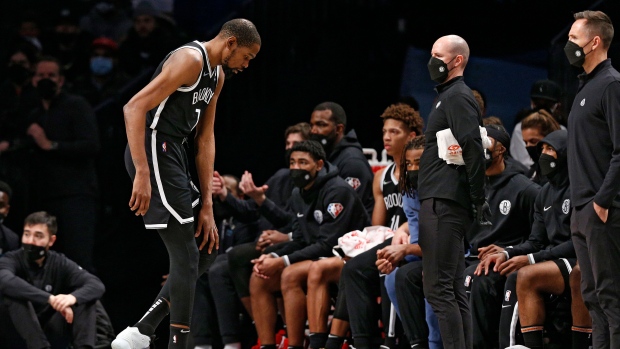 NEW YORK (AP) — James Harden believes the Brooklyn Nets may be experiencing some bad luck despite their standing near the top of the Eastern Conference.

The All-Star guard had 27 points, 15 assists and eight rebounds as the Nets cruised to a 120-105 victory over the New Orleans Pelicans on Saturday, despite losing NBA scoring leader Kevin Durant in the first half to a left knee sprain.

“Tonight what happened to KD and then Ky (Kyrie Irving) being able to play road games only and Joe (Harris), Nic (Claxton), LaMarcus (Aldridge), but we’ve been a resilient group all year, since I’ve been here,” Harden when asked if the Nets were snake bitten. “And we just got to keep going, keep pushing, keep pushing.”

Durant was hurt with 5:44 left in the second quarter when New Orleans forward Herbert Jones was driving down the court and crashed into Nets backup guard Bruce Brown, who fell backward into Durant’s knee.

Durant briefly limped around the court before asking to be taken out of the game. He finished with the 12 points and was walking with a limp when he left the arena midway through the fourth quarter.

Harden and coach Steve Nash said he will have an MRI exam on Sunday.

The Nets have been short-handed with both centers Aldridge and Claxton sidelined. Aldridge has missed the last five games due to soreness in the right foot. Claxton has not played his last three games because of tightness in his left hamstring.

Harris is recovering from left ankle surgery in November. Irving joined the Nets last week but is not allowed to play home games at the Barclays Center because New York City’s COVID-19 vaccination mandate.

“Guys got to step up. It’s simple,” Harden said. “Obviously you know how great of a player KD is and what he brings to the table each and every night consistently. So, guys got to step up and fill that role and just continue to compete.”

Nash, who did not have a chance to talk to Durant before the game concluded, knows it will be tough for Brooklyn to replace the two-time NBA Finals MVP should he be forced to miss some time.

“Yeah, of course it will be tough to lose him,” Nash said. “You know no one wants to see that. We obviously hope for the best outcome. Regardless of the outcome, we have to continue to work, build and grow, and get better and compete.”

Patty Mills added 21 points, Cam Thomas scored 20 off the bench and Kessler Edwards had 16 for the Nets, who never trailed in the game.

Brandon Ingram scored 22 points and Josh Hart had 14 points and 11 rebounds for the Pelicans, who had won two straight.

New Orleans was down by 10 at the end of the first quarter and trailed by as many as 30 points in the second period. The Pelicans shot just 15 for 44 from the field while being outrebounded 27-17 in the first half.

“We could have come out with more energy,” Hart said. “Defensively we were atrocious.”

New Orleans went on an 11-0 run to cut the deficit 71-55 with 8:51 left in the third quarter before Mills made a three-point play to stop the Nets’ scoring drought.

Nets: Rookie center Day’Ron Sharpe finished with 12 points and a career-high 10 rebounds for his first career double-double. Sharpe (20 years, 70 days old) became the fourth-youngest in franchise history to notch a double-double. … It was Harden’s 20th career game with at least 25 points and 15 rebounds.

Pelicans: Continue their three-game road trip at Boston on Monday.

Nets: Open a four-game road trip at Cleveland on Monday.