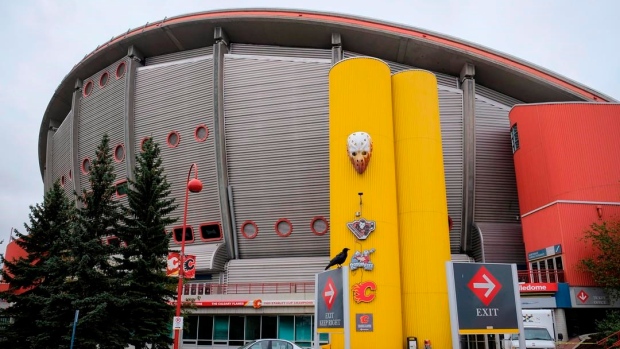 CALGARY — A new NHL arena in Calgary is closer to becoming a reality.

The city, the Calgary Flames and the Calgary Stampede have agreed on terms for an event centre that would become the new home for the Flames and replace the 36-year-old Saddledome.

City council has yet to approve the deal, but details were unveiled at a news conference Monday evening at city hall.

The cost to build it would be split equally between the city and Calgary Sports and Entertainment, which owns the Flames, the Western Hockey League's Hitmen, CFL's Stampeders and National Lacrosse League's Roughnecks.

Council is expected to vote on ratification next week. If the deal is approved, shovels go in the ground in 2021.

"This is a good deal for Calgary," Mayor Naheed Nenshi said at a news conference.

"For some years now I have been saying that any investment in public money in this project must come with public benefit. This deal does that."

The vision for the venue is for it to be multi-purpose with portions that can be sectioned off for art installations and concerts of different types, as well as sports.

The new building on a parcel of land north of the Saddledome would be the heart of a larger revitalized commercial and residential district east of downtown near the Stampede grounds.

In the deal proposed Monday, CSEC will not relocate the Flames during the 35-year term.

"There was never a sense of us wanting to be anywhere else. You can't make that statement any more boldly than having your owners write a cheque for $275 million," CSEC vice-chair Ken King said at the news conference.

"This is a huge cheque for them to write at a very difficult time in our city's economy and a global economy and that's a powerful statement on their part," King said.

The city would own the event centre.

CSEC would cover all operating, maintenance and repair costs during a 35-year licensing and management agreement with the city, with clauses to extend that term.

CSEC would retain all revenues generated by the event centre, but the city would get a facility fee on every ticket sold to every event for 35 years — estimated to be $155 million — receive a share of naming rights and collect any additional property tax from businesses that spring up in the area.

The city vowed in its proposal that the new arena would not increase municipal property taxes.

Negotiations between Calgary and the Flames broke off in 2017 when King called discussions "spectacularly unproductive.''

Before talks stalled, CSEC had offered to put $275-million into a $500-million arena.

The city had proposed a three-way split on the cost of a $555-million arena, with the city and the Flames each paying $185-million and the remaining third raised from a surcharge on tickets.

The arena has re-emerged at a time when city council is trying to find $60 million in budget cuts.

"The optics stink," Nenshi said earlier Monday. "They really stink, but I'm not one of those people who tries to massage or manage the public discussion so we can get the outcome we're looking for.

"If the deal is ready, the public deserves to know what's in that deal."

The event centre's proposed location on the east side of the downtown came after an $890-million CalgaryNext project pitched by the Flames in 2015.

Flames owners offered $200-million of their own money and proposed a $250-million loan be repaid through a ticket surcharge.

CalgaryNext was shelved when council determined remediation of creosote-soaked soil on site would push the cost of the project well over a billion dollars.