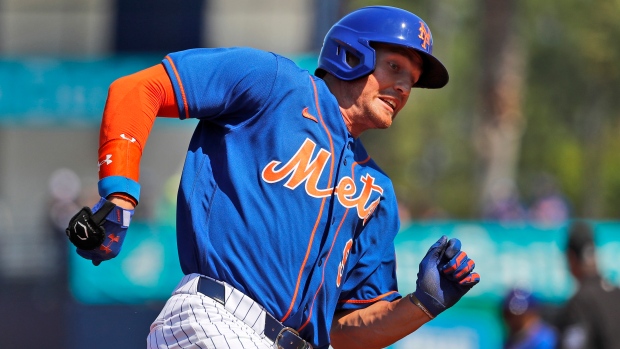 PORT ST. LUCIE, Fla. — After getting cleared to play by a cardiologist, Brandon Nimmo could joke.

“I guess I have a little bit larger heart," the New York Mets outfielder said Friday. “Hey, I’ve got a lot of love to give.”

Nimmo was removed from the starting lineup before Wednesday's game against Houston.

After a series of tests and monitoring that included 24 hours with a wearable device, the 26-year-old was back in the lineup on Friday against St. Louis.

The Mets became cautious when they noticed an irregularity in Nimmo’s electrocardiogram. Nimmo also underwent an echocardiogram to ensure he didn’t have thickened heart walls.

“The layman way they put it for me was an ‘irregular heartbeat.’ But it doesn’t happen to me when I get up to 85% of my heart rate. It doesn’t affect how I play. It’s just a resting heart rate and didn’t appear during my peak physical exertion,” Nimmo said. “I wasn’t concerned. It was more frustrating on my end. But I understood. The heart’s a different thing. You want to check all the boxes on that.”

Nimmo’s wife, Chelsea, surprised him by tweeting Thursday “he’s healthy and feels great" followed by “I also apologize in advance if this breaks any rules I don’t know about.”

Canó was the designated hitter and walked and flied out against St. Louis starter Adam Wainwright. The 37-year-old Canó is to be a DH again Sunday and play second base on Tuesday.

The eight-time All-Star played in just 107 games last year, his fewest in a season that did not include a suspension. He played in 80 games in 2018 after testing positive for the banned substance Furosemide.

New manager Luis Rojas intends for Canó to ease into the exhibition season.

“Last year he started playing from the first game,” Rojas said. “He wanted to see the teams in the division, coming to the National League. He’s going to keep working with the performance staff to keep strengthening his lower half. We’re not going to put a number or a goal for the number of games that he’s going to play.”

Notes: RHP Jacob deGrom, coming off his second straight NL Cy Young Award, is to make his first exhibition appearance Sunday, against Washington. … Rojas had no update on the cardiac test on 1B/OF Matt Adams.