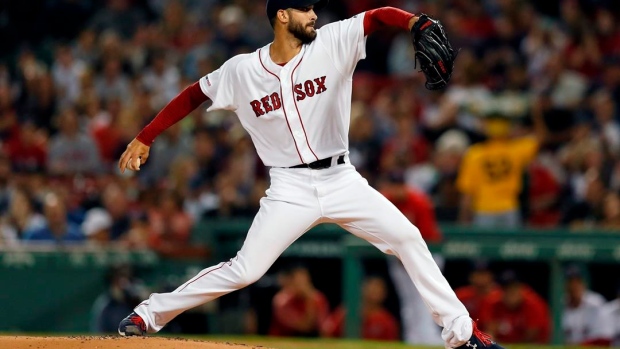 PORT ST. LUCIE, Fla. — New York Mets pitcher Rick Porcello made his first pitch to be part of the club’s starting rotation Saturday, but the Miami Marlins stole a bit of his thunder.

Porcello pitched one inning and allowed two hits in the Mets’ spring training opener, allowing one run when Miami’s Monte Harrison swiped a pair of bases and scored on a bloop single.

The Mets lost 5-3, dropping their first game in newly-renovated Clover Park, which has undergone a $57 million facelift that began last year.

Porcello pitched 11 seasons in the American League for the Detroit Tigers and Boston Red Sox before inking a $10 million, one-year deal with the Mets. He's never pitched in the National League and expects a learning curve — something the Marlins gave him with aggressive baserunning during his 17-pitch outing.

“Get out there first pitch with a runner on first (base), and he’s gone," Porcello said. "I’ll start paying attention to that more and be prepared more for a change in style of play.”

After singling to right field, Harrison got a quick jump and easily stole second, then scampered to third as Isan Diaz struck out. Garrett Cooper’s single with two outs plated Harrison.

Luis Rojas — in his first game as the Mets’ skipper — liked Porcello’s work and said the team prepares its hurlers for the running game.

“That’s something we’re constantly talking about in camp,” Rojas said. “We’re playing against a team like the Marlins — they’re aggressive. They establish that and did it last year on the bases. Throughout camp, we’re going to keep on working on controlling the running game.”

The 2016 AL Cy Young winner went 14-12 with a 5.52 ERA over 32 starts in his final of five seasons with the Boston Red Sox, but his durability may give him a leg up in the competition to earn a starting spot in the rotation.

A New Jersey native, Porcello has made at least 31 starts in all but three seasons. He has topped 170 innings in each campaign except one — his sophomore season in 2010 when he worked 162 2/3 innings for the Detroit Tigers while making 27 starts.

NOTES: In Jupiter in the club’s other split-squad game, the Mets lost 2-0 to the St. Louis Cardinals. RHP Marcus Stroman started and allowed three hits, including a solo homer to Tyler O’Neill, in 1 1/3 innings pitched. ... RHP Seth Lugo (broken toe) threw off a mound Saturday morning. “It felt pretty good, and the pitches were coming out real good. I felt a little soreness when I’m done, but that’s to be expected,” said Lugo, who added he usually needs five or six spring appearances to be ready for the regular season. ... The Mets play at Clover Park again Sunday, sending LHP Steven Matz against the St. Louis Cardinals. RHPs Jeurys Familia, Robert Gsellman, Brad Brach and Tyler Bashlor are scheduled to relieve.