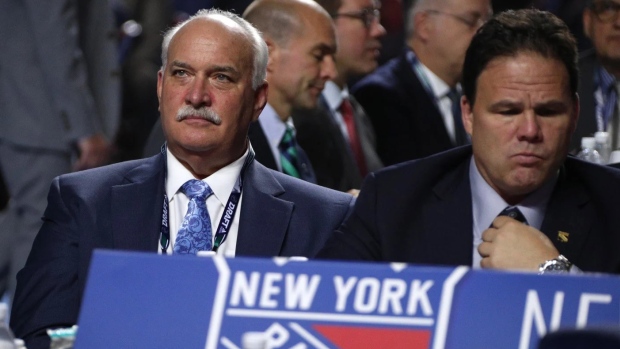 "We want to thank JD and Jeff for their contributions to the organization. They are both great hockey professionals who worked hard for the Rangers, however, in order for the team to succeed in the manner our fans deserve, there needs to be a change in leadership," MSG Sports executive chairman James Dolan said in a team release.

TSN Hockey Insider Darren Dreger notes that the firing is unrelated to the team statement made by the Rangers on Tuesday regarding the incident with Washington Capitals forward Tom Wilson on Monday. Another source told Dreger that ownership felt the team underachieved this season.

TSN Senior Hockey Reporter Frank Seravalli added that Davidson and Gorton attempted to distance themselves from the team statement calling for the dismissal of George Parros, the head of the NHL Department of Player Safety, after he decided not to suspend Wilson.

Sources say that #NYR president John Davidson and GM Jeff Gorton scurried to distance themselves from the team statement that was issued on Tuesday night, telling other executives that they did not know it was in the works until after it was released.

In wake of Davidson and Gorton's dismissal, associate general manager Chris Drury has been promoted to serve as the team's president and GM.

"Chris is a very sought-after executive and a strong leader, who has proven himself to be one of the top young minds in hockey. We are confident he will effectively guide the team to ensure the long-term success we promised Rangers fans," Dolan said.

Drury has previously received opportunities similar to his promotion with the Rangers from other teams, according to Dreger, which is likely why the Rangers bestowed his new responsibilities upon him.

Chris Drury has been offered and declined very similar opportunities with other clubs, so his promotion makes sense. Dolan obviously felt it would benefit Drury to handle the exit interviewers, etc. Multiple levels of bizarre to saga.

Wilson was fined $5,000 for roughing Rangers forward Pavel Buchnevich, but went unpunished for injuring Rangers star Artemi Panarin in the skirmish that followed.

Panarin was ruled out for the Rangers final three games of the season on Tuesday due to the lower-body injury incurred when he was thrown to the ice by Wilson on Monday night.

"The New York Rangers are extremely disappointed that Capitals forward Tom Wilson was not suspended for his horrifying act of violence last night at Madison Square Garden," the Rangers statement read. "Wilson is a repeat offender with a long history of these type of acts and we find it shocking that the NHL and their Department of Player Safety failed to take the appropriate action and suspend him indefinitely. Wilson’s dangerous and reckless actions caused an injury to Artemi Panarin that will prevent him from playing again this season.

“We view this as a dereliction of duty by NHL Head of Player Safety, George Parros, and believe he is unfit to continue in his current role."

The statement came after Rangers forward Ryan Strome and head coach David Quinn both expressed their disappointment in the league's punishment to Wilson.

“I just think it’s a joke, to be honest with you,” Strome said Tuesday. “I know it’s not my responsibility to make decisions, but I just can’t believe that. I think it sends a bad message, in my opinion. I think everyone pretty much agrees with that. And I just think that the league missed one here big time.”

"We're disappointed, I believe there was an awful lot there to suspend him," Quinn added.