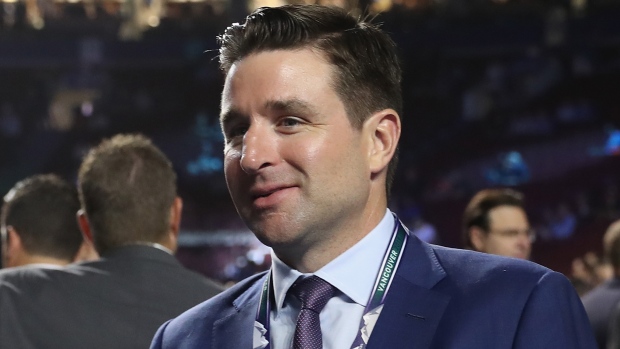 The New York Rangers are on the hunt for forward help as they look to build on their 10-4-3 start to the season, according to TSN Hockey Insider Darren Dreger.

Dreger notes that the Rangers pursuit of offensive help is not new, but has been kicked into a higher gear after losing Sammy Blais to a season-ending injury.

"The Rangers have been in the market for a forward for quite some time. And I think it’s been amplified by the fact they lost Sammy Blais for the remainder of the season earlier this week," Dreger explained on Insider Trading Thursday. "So, Chris Drury, the general manager for the New York Rangers, is looking for a middle-six forward, which isn’t a term we use often in hockey. That can be a third-line player or someone who can punch into the top six.

"U.S. Thanksgiving normally nudges the trade market a little, so there’s nothing on the front burner but definitely Rangers are on the hunt."

The Rangers picked up just their fourth loss in regulation Thursday, falling 2-1 to the Toronto Maple Leafs. The Rangers lost 37 of 46 face-offs against Toronto, seeing their season-long success rate drop to 45.6 per cent - second worst in the NHL.

"If we could have played like we did in the third the whole time we would have given ourselves a better chance, but I don't think we were too bad," Rangers forward Ryan Strome said postgame, per NHL.com. "Face-offs really killed us tonight, myself included (1-for-12). It was terrible. It's frustrating because we work so hard on it and when you give a good team the puck to start, it's really hard."

New York currently sits third in the Metropolitan Division as they look to reach the first round of the playoffs for the first time since 2017.