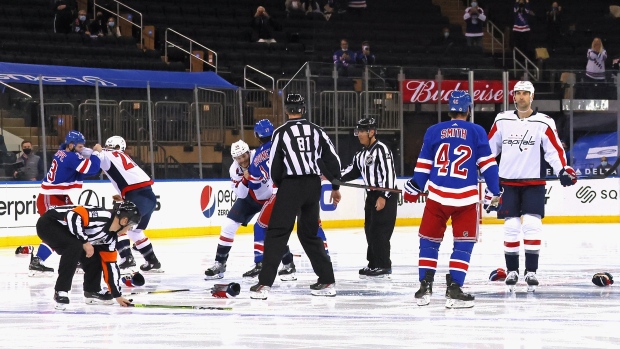 The opening faceoff of the New York Rangers versus Washington Capitals game Wednesday night at Madison Square Garden was followed by three fights after the puck drop.

Six players were assessed five-minute majors for fighting, but Capitals forward Tom Wilson wasn't among them.

Wilson, who was fined $5,000 by the NHL Department of Player Safety on Tuesday for roughing Rangers forward Pavel Buchnevich in Monday’s game, began the game on the bench.

But Wilson was forced to drop his gloves just 49 seconds later during his first shift of the game when veteran defenceman Brendan Smith challenged him.

Smith was given a five-minute major for fighting along with a two minute instigator penalty and a 10-minute misconduct.

When the first minute of the game was said and done, a grand total of 52 penalty minutes had been handed out.

At the end of the first period, 20 penalties had been called, with 100 penalty minutes assessed, including 15 to Wilson, and no goals were scored during the first 20 minutes of play.

The fireworks would continue in the second period as Anthony Mantha and Buchnevich were both given penalties following a series of slashes and cross-checks.

Mantha was given two minutes for unsportsmanlike conduct, but Buchnevich was assessed a five-minute major and a game misconduct for cross-checking the Capitals forward.