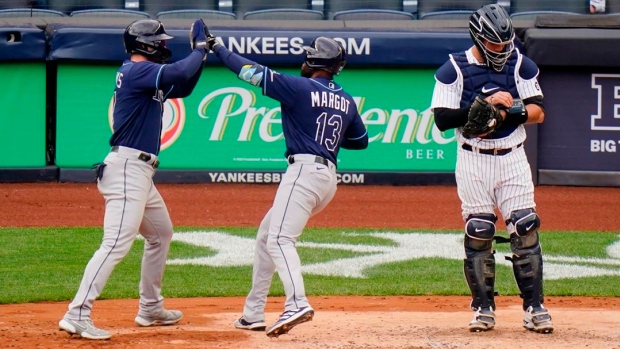 Sánchez was pulled from the game an inning later and sent for X-rays, which were negative. The club said he has a contusion on his right index and middle fingers and said he's day to day.

Yankees manager Aaron Boone said Kyle Higashioka would start at catcher Sunday to catch Gerrit Cole, but he expected Sánchez to be available for the team's next game Tuesday against Atlanta.

Sánchez's throwing hand was unprotected when Tampa Bay's Randy Arozarena tipped a pitch that appeared to hit Sánchez on the knuckles in the fourth inning.

Sánchez fell to the ground and writhed in pain before a trainer came out to inspect him. He remained in the game and finished the inning, then flew out to centre field in the bottom of the fourth. He was replaced by Higashioka to begin the fifth.

There were no runners on base when Sánchez was hit, and he admitted he forgot to hide his right hand behind his leg or body while waiting for the pitch, leaving it exposed.

“Of course you try to protect that hand as best as you can, but sometimes, you're focused on the pitch, focused on receiving, so you kind of forget about protecting it the best way possible."

The two-time All-Star was 0 for 1 with a walk Saturday and is hitting .237 with two homers and four RBIs this season.