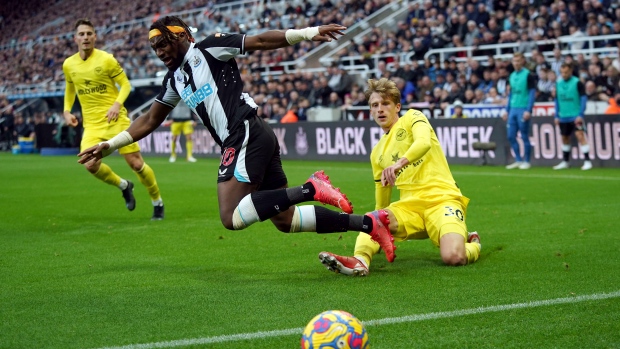 NEWCASTLE, England (AP) — Newcastle came from behind twice to salvage a 3-3 home draw against Brentford on Saturday but still fell to last place in the Premier League in new manager Eddie Howe's first game in charge.

Howe had to watch the game at home after testing positive for the coronavirus, and his team seemed to be heading for defeat when captain Jamaal Lascelles inadvertently turned substitute Frank Onyeka’s 62nd-minute shot into his own net.

However, Allan Saint-Maximin rescued the point with an equalizer in the 75th minute. Still, Newcastle remained the only team without a win in the league this season and slipped to the bottom of the standings after Norwich beat Southampton 2-1.

Despite the arrival of new owners -- non-executive chairman Yasir Al-Rumayyan was among a crowd of 52,131 for the first time -- a new head coach and a more progressive style of play, Newcastle's defensive problems were all too familiar.

Lascelles put the home side in front with just 10 minutes gone, powering home a header off the inside of the post from Matt Ritchie’s right-wing corner, but former Magpie Ivan Toney leveled within seconds.

Newcastle showed plenty of intent, but too little quality, and was punished once again four minutes before the break when Sergi Canos crossed for the unmarked Rico Henry to head in the second.

Newcastle leveled within eight minutes, however. After Saint-Maximin had cut inside from the left and seen his shot blocked, Joelinton pounced on the rebound and smashed the ball into the bottom corner.