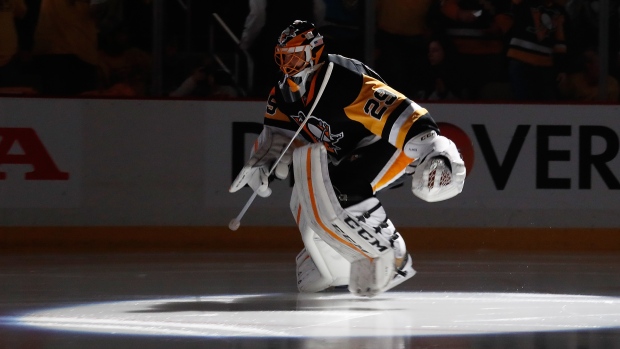 The NHL's off-season is upon us and teams are already looking to re-shape their rosters for a more successful 2016-17 season. Keep up to date on the latest trade/free agent speculation and rumours from around the league.

The Calgary Flames appear to have targeted a new No. 1 goalie.

According to Eric Francis of the Calgary Sun, Flames general manager Brad Treliving has “been in contact with [Pittsburgh GM Jim] Rutherford” with regards to two-time Stanley Cup champion Marc-Andre Fleury.

Fleury has two years remaining on his contract with an annual cap hit of $5.75 million. He was relegated to the backup role in Pittsburgh after rookie goaltender Matt Murray took the reins to close out the regular season - Fleury was out with a concussion - and shone in the playoffs en route to winning the Cup over the San Jose Sharks.

Fleury has a no-movement clause in his deal that allows him to submit a list of 12 teams he cannot be traded to.

McKenzie: Starting to see market dry up for defencemen

TSN 1260 Hockey Insider Bob McKenzie joins guest hosts Dave Jamieson & Dan Tencer to discuss some of the moves made in the NHL this week, and how the market for defencemen is slowly drying up heading closer to the draft.

The Edmonton Oilers have plenty of decisions to make with the No. 4 pick at the upcoming draft and have a few options on the table, according to Jim Matheson of the Edmonton Journal.

Matheson points out that the most likely scenario has the Oilers keeping the pick and selecting either forwards Matthew Tkachuk or Pierre-Luc Dubois, but other targets could include moving up, down, and out of the first round altogether.

Edmonton could target the consensus third-best player in the draft, making a move up to the No. 3 spot to take Finnish winnger Jesse Puljujarvi, or go backwards to No. 6 and select D Mikhail Sergachev, whom a scout told Matheson is “the best all-around defenceman in the draft.”

The last option involves moving the pick in a package deal for a top-two defenceman in the NHL.

The cards are on the table, the Oilers just have to play theirs right.

Buffalo Sabres forward Zemgus Girgensons does not like rumours about him heading to the KHL.

The Latvian forward responded to a Latvian report claiming he was exploring the idea of signing with KHL club Dinamo Riga.

Girgensons, a fan-favourite in his native country, is a pending restricted free agent. He scored seven goals and 18 points in 71 games last season.

It appears the KHL is not “The One.”

Deal or no deal?

The Hall of Famer told The Denver Post that he would be meeting with the 24-year-old’s agents to discuss his future with the club, including the idea of a long-term contract and arbitration.

“I’d like to do a long-term deal with Tyson. If that doesn’t work out, it’s expected he’ll go to arbitration,” Sakic said. “Either way, he’ll be here.”

“Whatever the two parties decide,” Sakic said. “We had initial talks. Not much lately, but I’m sure it’s going to heat up in the summer. And I’m sure we’ll have it done by training camp.”