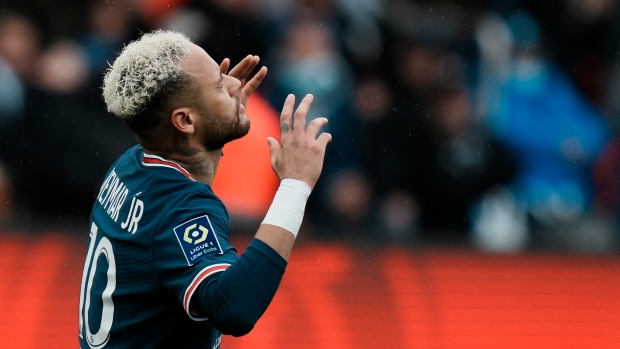 PARIS (AP) — Record-breakers Neymar and Lionel Messi felt the heat from Paris Saint-Germain's angry fans following another Champions League humiliation, getting whistled every time they touched the ball during a 3-0 home win against Bordeaux on Sunday.

Even when Neymar scored the second goal against rock-bottom Bordeaux the fans jeered him. Even when Messi embarked on a trademark run from deep and hit the post he got booed.

“I feel sad about what I saw today,” PSG coach Mauricio Pochettino said. “All of us were upset."

While the runaway leader moved 15 points clear in a league it usually dominates, the fans want success elsewhere.

Yet PSG blew it again in the Champions League this week against Real Madrid.

“We have to accept responsibility for what happened,” Pochettino said "We share the disappointment of the fans.”

PSG has already been knocked out of the French Cup and Pochettino is widely expected to be replaced next season.

At which point Kylian Mbappe, who scored PSG's first goal against Bordeaux midway through the first half, might be playing for Real Madrid. His contract runs out in June and he can leave on a free transfer.

PSG's top scorer was the only player spared the whistles when the team names were read out.

“Obviously we understand, we understand their hate and their screams,” PSG defender Presnel Kimpembe said. “We're all to blame, not one more than the other.”

But record seven-time Golden Ball winner Messi and Neymar — the world's most expensive player at 222 million euros ($242 million) — were booed throughout. The two former Barcelona stars were also on the receiving end of some hostile chants encouraging them to leave.

Some fans in the Auteuil section at Parc des Princes even turned up 15 minutes late in protest at PSG’s midweek meltdown.

The team's supporters are seething at the manner of the latest humiliating Champions League exit.

PSG was up 2-0 on aggregate but fell apart following goalkeeper Gianluigi Donnarumma’s error. Madrid star Karim Benzema scored three goals in 17 minutes to knock PSG out of the competition that its cash-rich Qatari owners crave so much.

“It's tough, very tough because unfortunately it happens often,” Kimpembe said. “It's time to lift our heads up and to show that we're competitors.”

Bordeaux has leaked 68 goals, the most in the league, but almost scored in the first minute on Sunday.

With Donnarumma dropped, it was Keylor Navas in goal. He saved Remi Oudin's 20-meter strike before Jean Onana's header from the corner went just wide.

Neymar lost the ball against Madrid and against Nice in PSG's 1-0 loss last weekend with both times leading to counterattack goals.

His goal against Bordeaux came in the 52nd minute with a tap-in. A powerful strike from midfielder Leandro Paredes made it 3-0 in the 61st.

Elsewhere, PSG's bitter rival Marseille won 4-1 at Brest to go above Nice in second place and the automatic Champions League spot. They are level on points and goal difference but Marseille has scored more.

Brazilian midfielder Gerson scored in the third minute, Poland striker Arkadiusz Milik made it 2-0 in the 63rd with his 19th of the season overall, and Amine Harit netted in the 71st.

Moments after striker Irvin Cardona pulled a goal back in stoppage time, Turkey winger Cengiz Under replied with Marseille's fourth to keep Marseille ahead of Nice.

Fourth-place Rennes is in the Europa League spot and one point behind Nice and Marseille after a 4-2 win at Lyon. Forward Martin Terrier was among the scorers to reach 14 goals, two fewer than the league's top scorer Mbappe.

Fifth-place Strasbourg beat Monaco 1-0 at home and Reims won 1-0 at Angers. Lorient moved away from the relegation zone with a 2-0 win at fellow struggler Clermont and 19th-place Metz drew 0-0 with Lens.