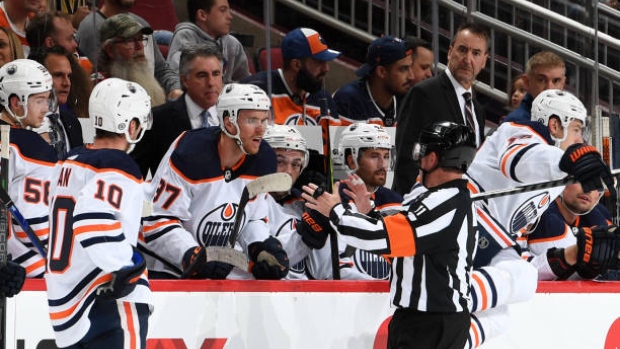 Before the regular season started, the National Hockey League announced officiating changes for the enforcement of Rule 59, signalling a tightened standard for how cross-checking would be called.

It was an interesting action for several reasons. Chief among them: I think there was growing fatigue about the number of uncalled cross-checks in games, particularly during postseason hockey. The league is always trying to counterbalance entertainment value and free-flowing play against the threshold of what they consider to be a penalty, and for years it was skewing too aggressively in one direction. Off-puck players could get away with hammering forwards in the interior with no regard for any sort of penalty call (or the other player’s safety, for that matter).

It was also interesting because of the dialogue that has followed this season. One of the leading topics has been about the broader standard for officiating, with Edmonton Oilers forward Connor McDavid in the centre of the debate.

McDavid, who can more or less carve up any defence at will, has drawn just nine minor penalties this season. It puts him in the top 10 league-wide, but anyone who watches these Oilers games knows that number could be 20 (or 30). Defences are doing whatever they can, most of which is illegal, to try and slow down the supernova talent.

So, the debate goes: Does the NHL need to call more penalties to improve the value of the product on the ice, not dissimilar to attempts made coming out of the 2004-05 lockout?

I think these are two fascinating stories to juxtapose against one another. In the instance of the cross-checking, the league identified an issue and said it would tighten the standard, attempting to heighten offence and reduce player injuries.

In the instance of broader officiating, it’s players, coaches, the media, and fans calling for changes to how the game is called for the betterment of the sport.

What happens when the NHL gets behind a rule change? Let’s zoom into some of the cross-checking data. If we look at the profile of penalties called this season and compare against prior seasons, we see that penalty calls are marginally up across the league – about one additional call for every three games played this season.

Any guesses as to what’s driving the shift? 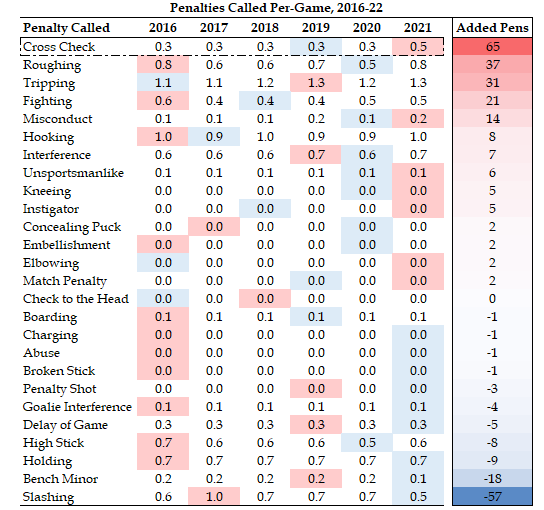 Cross-checking penalties are up, and considerably – something to the tune of 65 or so additional calls versus the prior five-year pace. It’s definitely an outlier, even relative to some of the other penalties being called more (roughing and tripping) or less (slashing) aggressively.

The NHL’s Video Rulebook provided some insight as to how this increase would manifest earlier in the year. Officials will still allow payers to use the shaft of a stick to guide or move an opponent without assessing a penalty, but if the force is considered excessive, a penalty is now called.

There are certain areas of the ice the league intends to call these force plays more aggressively – those being around the boards, in the open ice, and the net front. Four players (Seattle’s Adam Larsson, San Jose’s Jasper Weatherby, Vancouver’s Quinn Hughes, and New York’s Sammy Blais) have already been penalized three times for a cross-check this season.

Right or wrong, I give credit to the NHL for signalling a change and enforcing that change. Proposed changes made from the Department of Player Safety and the NHL’s officiating network over the years have been fleeting – some dying out quickly, others drawing the ire of coaches and players, others more creating unexpected and undesirable effects that have hampered the action on the ice.

Here is a real example of the league identifying a problem, giving clear guidance on it, and then taking that into action.

To that end: if the league can endeavour to fix the cross-checking pandemic, can it – or, perhaps, will it – consider more dramatic changes next off-season? If the sport is serious about enhancing offence and reducing injuries, as they indicated for the cross-checking standard, then this may just be the tip of the iceberg.