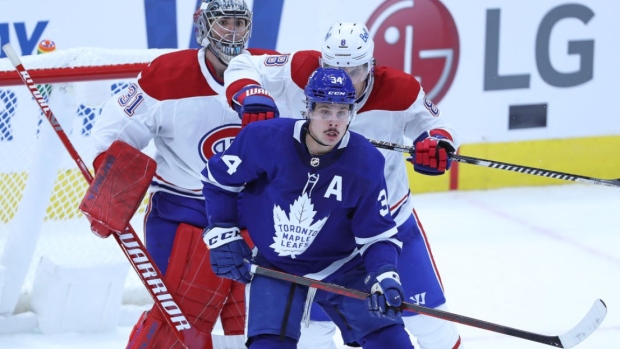 Rather quietly, the National Hockey League released an interpretation statement on Rule 59 last week, indicating it will crack down on cross-checking.

The league intends to hold a tighter standard for the enforcement of the rule, and it’s a long time coming for most hockey fans. Playoff hockey in particular has become synonymous with rampant cross-checking, and the league has recognized it as an issue.

While I appreciate the clarification (and the expected standard tightening), I do wonder about the ramifications for the upcoming season.

The NHL has long abandoned the spirit of the rule book, recognizing literal interpretation would mean waves upon waves of power-play opportunities. But because the interpretation is loose and only a small percentage of infractions are actually called, it’s led the officiating standard down another path. That path: the goal of equivalent penalties per side.

What’s interesting about the move against cross-checking is it may have a considerable impact on how we view the sport.

Last year, we saw about 6.9 penalties called per game. When controlling for offsetting penalties and the like, that meant just under six power plays a game. Four penalties explain half of those opportunities: tripping, hooking, slashing, and holding, in that order. As for cross-checking? It’s rather rare, about four to five per cent of the penalty profile over a given season: 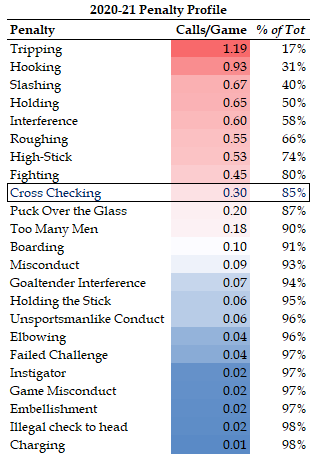 So, what would a change in philosophy mean for next season? The way I see it, there are three possible outcomes:

- The league tightens the officiating standard for the full season, and cross-checking calls increase for a period of time.

- The league tightens the officiating standard for the full season, and cross-checking calls increase initially, then taper off as players become acclimated to the change.

Unfortunately, the third bullet should be considered in the range of outcomes – it wasn’t 10 years ago that the league became momentarily serious about supplemental discipline, only to kowtow to concerns over how punitive suspensions were becoming.

But let’s say the league does get after cross-checking. What do we see as possible outcomes?

- Cross-checking resembles the penalty profile of something like tripping or hooking, where you see a call a game.

- Cross-checking resembles the penalty profile of something like tripping or hooking, but other penalties are called less aggressively.

- It is not lost on me that a change in the frequency of which cross-checks are called would drive a corresponding increase in the number of power-play opportunities, increasing the amount of scoring league wide.

If cross-checking starts to be called like tripping, consider the ramifications towards league scoring: 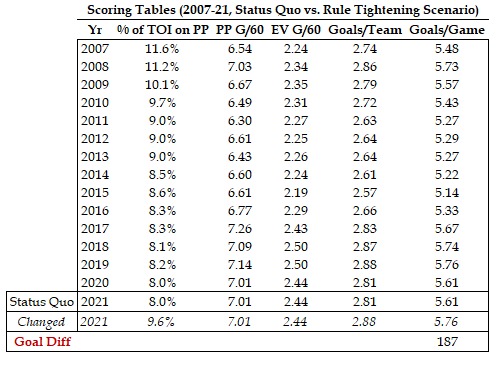 This case assumes that teams are going to see one additional cross-checking penalty call per-game (which, I would posit, is exceptionally conservative still relative to the number of observable cross-checks per game), and close to one full-length power-play opportunity to boot. What would that mean for scoring? About 187 additional goals for the league, or a 2.5 per cent increase in scoring when benchmarked against the 2018-19 full season.

There are a lot of other variables that come into play here. The league may be more draconian with the whistle than expected, which would drive more cross-checking calls and higher rates of scoring. The players may learn quickly where the new boundaries are for officiating teams, which may reduce the number of power-play opportunities called but may increase the ability for attackers to generate higher shot volumes from dangerous areas of the ice (e.g., the low slot).

This will be one of the more interesting changes to follow heading into this season. If the NHL sticks to their guns on this, we should see a spike in scoring. If not because of the additional power plays, then because offences are going to have more room to operate at even strength.