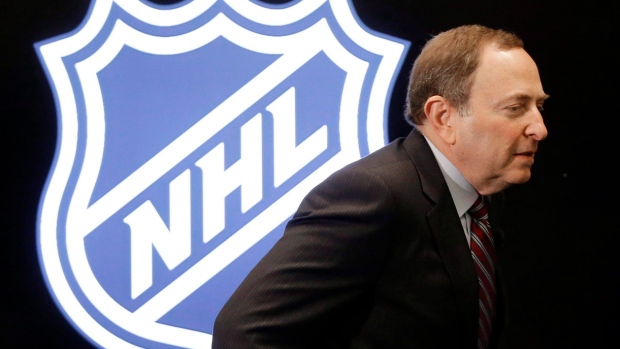 The National Hockey League and former players suing the league over its handling of concussions are back in court Tuesday arguing over an issue the NHL hopes will lead to the case’s dismissal — pre-emption.

The NHL contends that concussions are a health and safety issue, and these issues are covered by the league’s collective bargaining agreement.

The league says this pre-empts any court action because player complaints about concussions and brain injuries should be dealt with through arbitration, even though it’s unclear how former players could pursue any claims.

Katie Baker, staff writer at The Ringer, joins Matt Cauz and Gareth Wheeler on Game Day to talk about NHL expansion, Bettman's reaction to the NFL acknowledging a link to CTE, and Bill Simmons' new site, "The Ringer".

A lawyer involved in the case told TSN that former players don’t have the ability to file arbitration complaints and NHL Players Association executive director Donald Fehr confirmed in an interview the NHLPA does not typically file complaints on behalf of former players.

“Former players are not our members,” Fehr said. “We are not in a position to represent them individually. If a retired player wants to call and talks things through, I’m happy to do it, and refer them to people.”

The former NHL players who are suing the league in U.S. district court in Minnesota have responded that the NHL has engaged in both negligence and fraud, promoting violence as a part of its marketing while also claiming to protect players' safety. Because the allegations against the NHL involve fraud, the rules of pre-emption don't apply, the former players argue.

The NHL has asked the judge overseeing the lawsuit to stop the discovery process — the exchanging of relevant documents and emails and depositions of key employees and league officials — until she rules on the NHL’s motion to have the case dismissed on pre-emption grounds.

It’s unclear when Judge Susan Nelson will rule on the NHL’s motion, but several sources close to the case say it appears the NHL is trying to “force Nelson’s hand" with the motion to stay discovery.

The issue of pre-emption, as well as a request by the former players to force the insurance company Chubb Corp., to turn over its documents - including the league’s insurance policies and related medical documents - will be discussed at Tuesday's court hearing, according to documents obtained by TSN.

Legal experts familiar with the NHL lawsuit are split over the possible outcome of the NHL’s pre-emption argument.

A similar motion was made by the NFL in the higher profile lawsuit in Philadelphia by its former players, but judge U.S. district court judge Anita Brodie did not have to make a ruling because the league and the players reached a settlement.

In December, the NHL asked a district court judge in Chicago to dismiss a wrongful death lawsuit filed by the estate of Derek Boogaard, a former NHL enforcer who died of a drug overdose in 2011. The court in that case ruled the NHL’s labour agreement did pre-empt any civil litigation.

Now, the NHL hopes Nelson uses the Boogaard ruling as a precedent. The lawyers for former NHL players suing the league hope Nelson sees their case in a different light. They say the Boogaard case involved allegations that the league enabled his drug abuse, and that those claims are different than the ones made in the NHL lawsuit in Minnesota.

“This is just reading the tea leaves, but I think [Nelson] is going to rule in favour of the plaintiffs,” said Paul D. Anderson, a Missouri lawyer who represents 28 former NFL players in football concussion litigation and is an adjunct law professor at the University of Missouri-Kansas City.

Anderson said the judge last year rejected the NHL’s motion to dismiss the case based on statutes of limitation.

“At that point, you’d think if she was going to grant the NHL's motion to dismiss based on pre-emption, she would have done it then, rather than allowing all of this discovery to go forward,” Anderson said.

Nellie Drew, a sports law expert and adjunct professor at the University at Buffalo, The State University of New York, said the former NHL players may benefit from their case being argued in Minnesota, instead of New York or Washington, as the NHL wanted.

“I think the chances are better than 50-50 that it goes ahead,” Drew said. “Minnesota is a comfortable venue for the labour side in lawsuits with management."

One trouble spot for the former players?

“We’ve seen almost 100 brains of former NFL players that have been diagnosed with CTE,” Drew said. "The same numbers have not been there with former hockey players. The evidence does not suggest there is anywhere near as big a problem in the NHL as in the NFL."

Jason Luckasevic, a Pittsburgh attorney who began working on the concussion issue in 2007 and filed the first concussion case against the NFL four years later, said he doesn’t believe the former NHL players have a good case.

“In the 1990s, the NHL instituted concussion protocols and return-to-play procedures for concussed players,” Luckasevic said. “That’s exactly the opposite of what the NFL was doing, sending out players back on the field a week after they had a concussion."

Anderson, from the University of Missouri, said the former NHL players won’t need a literal “smoking gun” to win their case.

“They’re going to go through all the medical studies that have been done over the past 60 years,” he said. “An industry has an obligation to stay abreast of the most modern science and advise its workforce about blatant risk."

“Has the NHL done that?”

In 2011, she heard a complaint filed by the NFL Players Association against the NFL during a four-month lockout before the 2011 season.

The players dissolved their union so they could file a class-action lawsuit alleging anti-trust violations by the NFL for illegally locking players out of team facilities. Nelson invalidated the lockout and ordered the NFL to resume operations.

Nelson, who was born in 1952, was appointed by U.S. President Barack Obama and assumed office in 2010. Born in Buffalo, she worked as a bank teller, summer camp counselor and waitress at Stouffer’s Restaurant while attending law school at the University of Pittsburgh, according to her judicial nominee questionnaire.

As a lawyer in the 1990s, she worked on one of the biggest cases in Minnesota history.

She represented the state of Minnesota and Minnesota BlueCross BlueShield in a case against Big Tobacco. After a 15-week jury trial, the case settled in 1998 on the last day of final arguments. The tobacco companies, including Philip Morris Cos. and R.J. Reynolds Tobacco Co., agreed to pay a settlement of more than $6 billion.