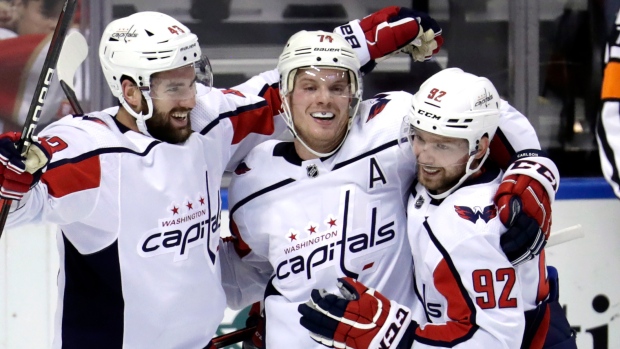 WASHINGTON — The bird is back, and the Capitals keep soaring.

Evgeny Kuznetsov scored his sixth goal of the season and unleashed his famous flapping bird celebration for the first time this season to help Washington beat the Vegas Golden Knights 5-2 Saturday night in a meeting of the 2018 Stanley Cup finalists. The Capitals have won six in a row and 10 of 11 and are chugging along as the top team in the NHL.

"We're working together as a team," said Nicklas Backstrom, who scored twice. "We're doing all the details right. We're trying to follow the system that the coaches want us to play. I feel like when you have confidence like we have — we've been winning a couple games in a row now — we're just trying to keep going here and get better every day. So far, so good."

After being far more serious in his post-goal demeanour since returning from a three-game suspension for inappropriate conduct, Kuznetsov finally let loose after scoring 58 seconds in and added an assist in the third period on the goal that sealed the win. Why now?

"I don't know," Kuznetsov said. "I think it stays inside."

It's easy for Kuznetsov and the Capitals to feel good right now. They haven't lost in regulation since Oct. 14 and are on a roll thanks to a mix of scoring from their best players, special teams success and solid goaltending, and all three of those elements were on display against Vegas.

Tom Wilson beat Marc-Andre Fleury for his eighth of the season, Jonas Siegenthaler scored the first of his NHL career and Backstrom had a power-play goal in the third. Goaltender Braden Holtby made nine of his 30 saves on the penalty kill when the Golden Knights had some of their best chances.

"They got a good power play, obviously," Holtby said. "I thought our guys did a good job. It was a good challenge. We battled through it."

Max Pacioretty and Reilly Smith scored for Vegas, which was again plagued by turnover troubles that contributed to a slow start this season. Giveaways contributed directly to the goals by Wilson and Siegenthaler.

"We had more turnovers than we had in the past few games and that really hurt us," coach Gerard Gallant said.

Fleury allowed four goals on 33 shots but made a spectacular save on T.J. Oshie on a 5-on-3 Capitals power play in the final minutes. The Golden Knights' point streak ended at five games.

A lot of that had to do with the Capitals, who never trailed and, perhaps most importantly, kept from blowing another third-period lead by turning up the pressure.

"We've let a lot of leads slip away this year," said John Carlson, who had two assists to pad his scoring lead among NHL defencemen win 28 points. "Those are big moments. We always talk about exceeding or doing better than normal in those moments. I think we've done a good job, but we've got a lot of room to grow and get better. It's certainly something we focus on, so tonight was a good job."

This was the third game between Vegas and Washington since the Capitals won the 2018 Final for their first title in franchise history. There were 24 players on the ice who participated in that series.

A lot of time has passed since then, but the intensity remains between the Golden Knights and Capitals.

"You know they give you a hard game no matter what," Holtby said. "They play relentlessly, especially turning over pucks and make it hard for you to get out of your own end. I thought both teams were skating well all night, and it was a real even hockey game."

NOTES: Siegenthaler's goal came in his 44th game and on the first anniversary of his NHL debut. ... Pacioretty scored for the third time in four games. ... With the primary assist on Backstrom's goal, Carlson passed Hall of Famer Scott Stevens for second on the franchise scoring list among defencemen. ... Capitals LW Carl Hagelin is day to day with an upper-body injury. He was replaced by C Nic Dowd, who returned from a three-game absence with a lower-body injury. ... World Cup winning U.S. Women's National Team soccer player Kelley O'Hara became the latest champion to chug a beer and receive a standing ovation at Capital One Arena. The World Series champion Nationals were honoured for their title last week.

Capitals: Look for a seventh consecutive victory when they host Arizona on Monday.