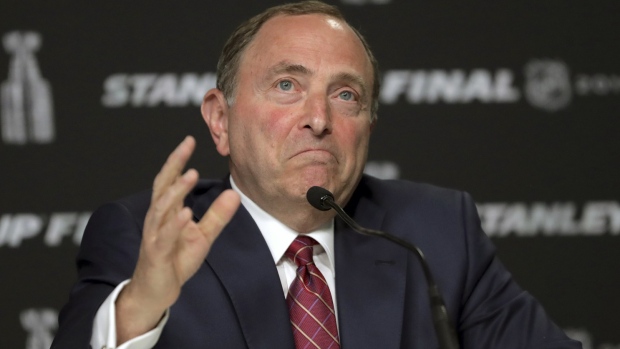 The National Hockey League is exploring short-term hubs, a temporary realignment and a reduced schedule for the 2020-21 season, the league reported on its website on Tuesday.

Speaking in a virtual panel discussion during the 2020 Paley International Summit, NHL commissioner Gary Bettman said the league is exploring teams playing in their own arenas - with or without fans - in hubs or a hybrid system.

"You'll play for 10 to 12 days," Bettman explained during the conference. "You'll play a bunch of games without travelling. You'll go back, go home for a week, be with your family. We'll have our testing protocols and all the other things you need.

Bettman added he would never ask players to return to a similar bubble system that took place during the NHL's Return to Play for the 2020 playoffs.

The league and NHL Players' Association are still weighing factors for how to get next season off the ground. The current closure of non-essential travel between the U.S.-Canadian border is one factor for discussing a temporary realignment.

"Obviously, we're not going to move all seven Canadian franchises south of the 49th Parallel, and so we have to look at alternative ways to play" Bettman said. "And while crossing the US-Canadian border is an issue, we're also seeing within the United States limitations in terms of quarantining when you go from certain states to other states. It's again part of having to be flexible.

"It may be that we're better off, particularly if we're playing a reduced schedule, which we are contemplating, keeping it geographically centric, more divisional based, and realigning, again on a temporary basis, to deal with the travel issue.

Files from Nick Cotsonika of NHL.com were used for this story.