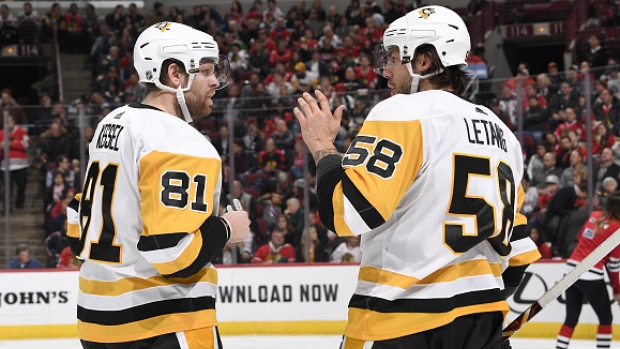 Pittsburgh Penguins general manager Jim Rutherford said Tuesday that after a trade fell through with the Minnesota Wild last month, Phil Kessel is now expected to remain with the franchise.

However, with Rutherford still looking to tweak his roster this off-season, TSN Hockey Insider Darren Dreger believes another veteran could be on the way out.

"Well if it's not Phil Kessel, it will be someone else," Dreger said Tuesday on Insider Trading. "The Pittsburgh Penguins are not starting next season with the same look and the same roster that they finished this season with. There's some speculation that veteran defenceman Kris Letang may potentially be in play. He's got the modified no-trade clause, he's got the no-move clause. He's got three years remaining (in his contract) and a big cap hit of $7.25 million. So there could be interest in Letang.

"I would say this, with the exception of Sidney Crosby, Rutherford is willing to listen on just about everyone."

Letang, 32, has spent his entire career with the Penguins since being drafted in 2005. He scored 16 goals and posted 56 points in 65 games this season, adding one assist as the Penguins were swept in the first round of the playoffs by the New York Islanders.

Rutherford admitted to The Athletic on Tuesday that he would need to clear cap space this off-season and stated once again that the team's blueline is unlikely to remain unchanged due to their current depth. He added however, that he does not expect to make any major moves this summer.

“Changes are coming,” Rutherford said. “Changes are in order, for sure. At this point in time, I don’t know exactly what they are going to be. It’s hard to say right now, but changes are coming. I’ll say this, though. I don’t think we’re going to make any changes that I would refer to as massive. I’d say I’m looking to re-tool more than anything.”

The Penguins are currently projected to have just $3.22 million in cap space (on a projected $83 million cap) this summer with three players - Marcus Pettersson, Zach Aston-Reese and Teddy Blueger - slated for restricted free agency.

New York Rangers general manager Jeff Gorton told the New York Post on Tuesday that he has not ruled a potential buyout this summer for a player on his roster.

“It’s on the table," Gorton said. "And regardless of what we do with this buyout window, we’d certainly look at the second one, too, depending on what comes up over the next few weeks. A lot can happen.”

Larry Brooks of The Post speculates that defencemen Brendan Smith and Kevin Shattenkirk could both be options for the Rangers, noting that the team has found no interest in either player on the trade market despite a willingness to retain up to 50 per cent of their salaries.

Smith, 30, signed a four-year, $17.4 million contract with the Rangers in 2017, months after being acquired at the trade deadline from the Detroit Red Wings. He spent this past season moving back and forth between the team's blueline and a fourth-line forward role. In 63 games, he scored four goals and added 13 points.

Shattenkirk, also 30, was the prized free agent of the 2017 UFA class and signed a four-year, $26.6 million contract with the Rangers. A 40-point scorer in each of his previous four seasons prior to joining the Rangers, Shattenkirk has failed to top 30 points in each of his first two seasons with the team.

The Rangers, who have been linked to pending free agent defenceman Erik Karlsson, are currently projected to have $19 million in cap space this summer with 19 players already under contract. Brooks believes that re-signing restricted free agents Pavel Buchnevich, Brendan Lemieux, Tony DeAngelo and Neal Pionk could cost up to $10 million, but Gorton didn't rule out going over the cap this summer to sign free agents.

“The number is about right, but I wouldn’t get fixated on that,” Gorton said. “I think we have a number of guys who are pretty valuable around the league, so we’re going to have a lot of flexibility over the summer.

“There’s also the [10 per cent] allowance where you can go over the cap. We’re not looking at it as if we can make only one big move or addition. We’ll see where it goes.”

"Going forward now, if we are going to add through free agency, we want to try to add top-four defencemen or top-six forwards, so I think our needs in that way have changed," Benning said. "I haven't been shy about stating that we would like to improve our defense. There are different avenues to try to do that, so we're looking at all those avenues."

TSN Hockey Insider Darren Dreger reported Tuesday the Canucks are interested in Toronto Maple Leafs defenceman Nikita Zaitsev, who has requested a trade. But it is unclear where Zaitsev ranks on Benning's wish list.

"The Leafs are still considering the option of trading Nikita Zaitsev. That's been out there for the better part of a week," Dreger said on Insider Trading. "There's been some tire-kicking, I'm told. There's been some interest from the Vancouver Canucks, but general manager Jim Benning has a priority list. He has a lot of work to do and he wants to get it done between now and the draft. Nikita Zaitsev is on his interests list, but he might be option three or four."

Zaitsev, who had three goals and 14 points in 81 games this season, is under contract for five more seasons at a $4.5 million cap hit.