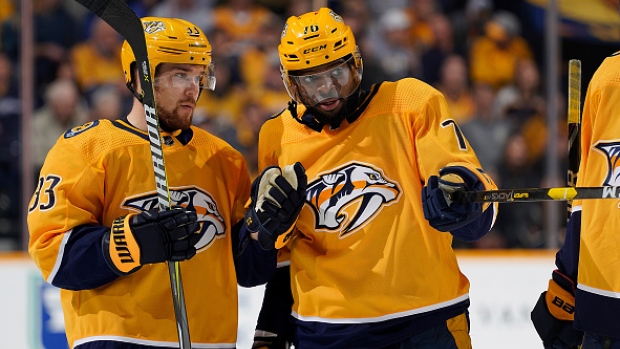 In an interview with TSN Hockey Insider Pierre LeBrun published to The Athletic, Nashville Predators general manager David Poile did not rule out making changes to his roster this summer.

"I don’t know what’s going to happen exactly," Poile told LeBrun. "Last year I pretty well said we weren’t going to make any changes. I’m not saying that this year. I’m also not saying we’re going to totally re-make our team. I’m just going to do my job, see who’s available, make some inquiries. If there’s opportunities to make our team better, I will do that. But certainly not in the mode of making a change for the sake of making a change.’’

Poile added that he believes the team needs to add more "secondary scoring" this summer, and LeBrun reports that has renewed speculation that the Predators will chase centre Matt Duchene should he hit free agency on July 1. The Predators were linked to Duchene in 2017 before acquiring Kyle Turris in the three-team trade that sent Duchene to the Ottawa Senators from the Colorado Avalanche.

The Predators top off-season priority, Poile said, is extending captain Roman Josi who is entering the final year of his contract. Josi's deal will then dictate a key part of the team's salary cap outlook beyond next season.

Speculation has surrounded P.K. Subban throughout his time in Nashville, and while Poile wouldn't rule out moving the defenceman and his $9 million cap hit, LeBrun believes other options exist for the Predators to clear cap space. He lists Craig Smith, Mikael Gralund, Nick Bonino or Kyle Turris as forwards who could be on the move.

Turris owns the highest cap hit of the group at $6 million and is signed for five seasons. Granlund, acquired at the trade deadline for Kevin Fiala, carries a $5.75 million cap through next season, while Smith is also signed through next season at a $4.25 million salary. Bonino has two years left on his deal at a $4.1 million cap hit.

Subban is listed at No. 6 on the TSN Trade Bait board, while Turris is ranked No. 8.

The Carolina Hurricanes surged to the Eastern Conference Final after entering the playoffs as the top wild-card team and Luke DeCock of The Raleigh News and Observer believes the team can use this off-season to build off their success.

DeCock notes that neither Petr Mrazek or Curtis McElhinney, who both started games for the Hurricanes in the playoffs, are under contract for next season and believes the team will "at least have to explore" moving on from Mrazek. The team still has goaltender Scott Darling signed for two more seasons at a $4.15 million cap hit, though he started just eight games for the team this season.

The Hurricanes went just 1-6 in the playoffs with pending free agent Micheal Ferland in the lineup, leading DeCock to believe that winger will not be back with the team. The 27-year-old scored 17 goals and posted 40 points in 71 games during the regular season and added one assist in seven playoff games, missing the team's entire second-round series with an upper-body injury.

To improve next season, DeCock writes that the Hurricanes still have a "desperate need" for another centre, but wonders if 2017 first-round pick Martin Necas could fill that void internally.

Finally, DeCock believes the team must use this off-season to determine defenceman Justin Faulk's future with the team. Faulk, 27, is signed through next season at a $4.83 million salary and has a 16-team no-trade list. He scored 11 goals and posted 35 points in 82 regular-season games and added one goal and eight points in 15 playoff games.

Ryan Callahan appeared in just 52 games with the Tampa Bay Lightning this season, often serving as a healthy scratch. The 34-year-old scored seven goals and posted 17 points, failing to top the 20-point mark for the third consecutive season. He dressed in two of the team's four playoff games and did not post a point.

With a $5.8 million cap hit for next season in the final year of his deal, Callahan admitted to The Athletic that his days with the Lightning are likely numbered.

“Obviously there’s a salary cap crunch, and it doesn’t take a scientist to figure out right now I’m on the outside looking in,” Callahan said. “Whatever happens, happens. But I was really happy with how I finished the year.”

Joe Smith of The Athletic believes the Lightning may try to trade Callahan at the NHL Draft, though he adds Tampa Bay will likely have to deal a draft pick or prospect to entice a team to take the forward back. He adds that buying out Callahan could also be an option, though it would leave the Lightning with a $2.67 million hit against their cap this season and $1.57 million hit against the cap in 2020-21. Tampa Bay is already facing a cap crunch with $74 million committed to just 17 players (including Callahan) for next season with Brayden Point still in need of a contract.

Callahan's agent, Stephen Bartlett, told The Athletic that he has not discussed Callahan's future with the team's front office yet, but added the forward will submit his 15-team approved trade list.