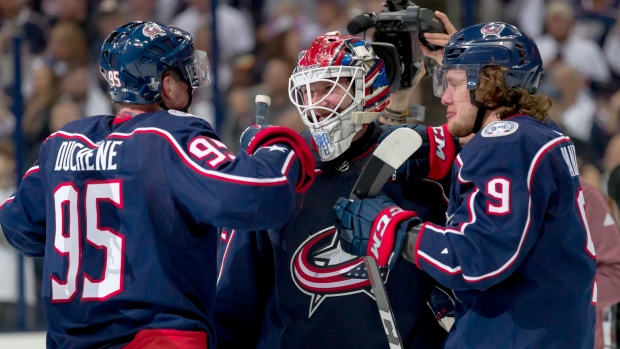 The Columbus Blue Jackets went all-in at the trade deadline acquiring pending free agents Matt Duchene, Ryan Dzingel and Adam McQuaid while parting with draft picks and prospects to do so.

In an interview with Aaron Portzline of The Athletic, Blue Jackets general manager Jarmo Kekalainen stated once again he'd like to keep Panarin and Bobrovsky

"I don’t count anybody out," Kekalainen said. "I told Panarin and Bobrovsky, if they’d like to return, we’d like to have them. It’s not a money issue. We’ll pay market value. We realize that’s the price of doing business. If not, we’ll move ahead accordingly."

When it comes to Duchene, who was acquired in February from the Ottawa Senators for Vitaly Abramov and Jonathan Davidsson and a 2019 first-round pick, Kekalainen said the team will need to consider his value beyond just a contract since the Blue Jackets will also owe the Senators their 2020 first-round pick should he re-sign in Columbus.

"I would think he’d consider us after everything that he’s said, but I don’t really want to get into speculations," Kekalainen said of Duchene. "We have our own ideas and plans for our team and how everything goes together. We’ll talk about it at the right time. He played well for us. He was a good player. It’s not just a hockey decision. I guess you could say it’s a hockey decision, but what is the price? It’s not just the contract. It’s also a first-round pick."

Kekalainen also rejected the notion that an eighth-place finish could be a high-water mark for the Blue Jackets next season should they lose all of their pending unrestricted free agents.

"I don’t think so, no. We’re not planning to. There’s no reset or rebuild or whatever you want to call it, no. We have a strong core in place," he said. "Look what happened in Long Island. They lost their best player, John Tavares. Great player. But they came together and won. Teams win. Look at the world championships this year. Finland wins with no NHL players. None. At all. And they beat the superstar teams because they played as a team. Disciplined as hell. No agendas, no egos. Everybody stuck to the system and the way they wanted to play.

"The (UFAs) are great players, but the Islanders did just fine losing their captain and best player. We have a great core in place that will be here next year. I think we have a good team no matter what happens, and that’s a risk we were ready to take at the deadline. If it happens (that they leave), so be it. We’ll move on. We’ll fill holes with other ways. I’m convinced that we can do that and I’m convinced we’re going to have a very good team next season."

Matt Larkin of The Hockey News believes Erik Karlsson will still be able to create a "frenzy" in free agency and cash in on an $11 million AAV.

Larkin argues that Karlsson is by far the best free agent defenceman in this year's class, which he notes is thin beyond Jake Gardiner, Tyler Myers and Alexander Edler. He writes that because of this, Karlsson should be able to draw interest similar to that of John Tavares last summer before cashing in.

Karlsson was linked to the Ottawa Senators and Montreal Canadiens this week, with Don Brennan of the Ottawa Sun reporting Karlsson's wife, Melinda, would like to move closer to her hometown of Ottawa.

Citing Brennan's report, Larkin believes the Canadiens and Senators are both among the five front-runners for Karlsson, but also lists the New York Rangers, Sharks and Tampa Bay Lightning as potential suitors for his services.

Karlsson is ranked No. 2 on the TSN Free Agent Frenzy Top 30 list.

TSN Hockey Insider Bob McKenzie reported last week the Calgary Flames are willing to part with one of T.J. Brodie and Travis Hamonic as they look to shed salary on their blueline.

Kent Wilson of The Athletic lists the Toronto Maple Leafs, Winnipeg Jets, Tampa Bay Lightning, Chicago Blackhawks and Philadelphia Flyers as teams who have a need on their back end and could be interested in the Flames defencemen.

Wilson believes the Maple Leafs could have the cap space to take on either Brodie ($4.65 million cap hit) or Hamonic ($3.857 million) if they manage to find suitors for Patrick Marleau and Nikita Zaitsev. He writes the Flames would be interested in Kasperi Kapanen as a return for either player, though the Maple Leafs are more likely to counter with a package including Connor Brown.

Wilson adds that the Jets are expected to part with Jacob Trouba this summer and could lose Tyler Myers to free agency, leaving them thin on the blueline. He believes the only player of interest to the Flames would be Jack Roslovic and wonders whether the Jets will be willing to part with the promising 22-year-old. Roslovic's former agent said earlier this week that the winger was unhappy with his role with the Jets last season, but denied that he requested a trade.

Both Hamonic and Brodie are set to become unrestricted free agents next year.