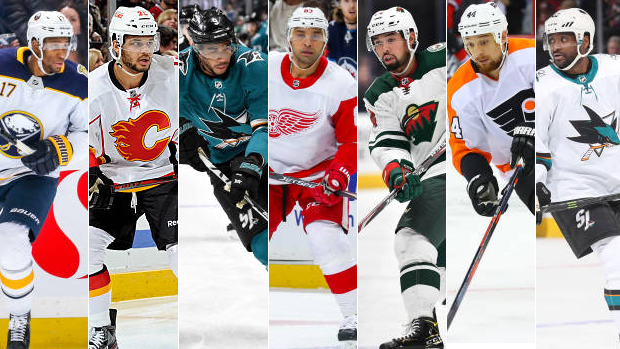 A group of seven active and retired professional hockey players announced this morning the formation of a new coalition called The Hockey Diversity Alliance (HDA) with the goal of eradicating racism and intolerance in the sport.

“It’s time for a change in society and in our game,” Aliu said in an interview on Sunday with TSN. “I feel like we’ve got great voices to bring about a positive change. We’ve all faced racism. All seven of us have dealt with it. Hockey is a game that doesn’t easily embrace change. It's stuck in time more than other sports and there’s a lot more work to be done."

The hockey players have been advised in recent days by former NFL quarterback Colin Kaepernick on how to help effect change in hockey, a predominantly white sport.

“This is historic, players of colour coming together like this, it’s never happened before,” Kane told TSN on Sunday.  “We couldn’t wait around any more. We’ve all had enough of this ... We are united and we are going to demand change. We felt, why not us?”

The players have been in discussion about starting a group since shortly after Aliu went public last November with his experiences of racism in professional hockey. Aliu was born in Nigeria and raised in Ukraine and Canada.

Aliu said coach Bill Peters used racial slurs in his presence when the two were with the American Hockey League’s Rockford IceHogs during the 2009-10 season. Peters, who was coaching the Calgary Flames when Aliu made the allegations, resigned from the Flames and is now coaching a team in Russia’s Kontinental Hockey League.

When Daley was playing with the Ontario Hockey League's Sault Ste. Marie Greyhounds in 2003, team head coach and general manager John Vanbiesbrouck stepped down from his position after using a racial slur to describe Daley, who was the team captain.

"I used the 'N' word instead of calling him Trevor," Vanbiesbrouck said at the time. "I used it just not thinking."

Vanbiesbrouck was hired by USA Hockey in 2018 as its assistant executive director of hockey operations. He also served in the role of general manager of USA Hockey’s national junior team in 2019 and 2020.

"Let's be honest, Trevor Daley's situation happened 15 years ago and it was a story for a little bit and then things move on," Aliu said. "The person involved is now a head at USA Hockey. Wayne Simmonds' story with bananas, it's a one- or two-day story and then we move on. We have some real issues."

In September, 2011, Simmonds had a banana thrown at him from the stands during an NHL exhibition game in London, Ont.

Kane said the new group would be launching a website and a charity in the coming days to raise funds for various initiatives. One hope is to bring hockey to communities that have not traditionally been exposed to the game, he said, adding another is to work alongside the NHL and other professional leagues on minority hiring practices.

“We have a lot of goals and this isn’t all going to happen overnight,” Kane said. “But it won’t happen with us sitting on our hands and not doing anything. We need to take that first step.”

Kane and Aliu said they planned to disclose their plans to the NHL today and hope to work collaboratively with the league.

“Although we will be independent of the NHL,” reads a joint statement signed by all seven executive committee members, “we are hopeful that we will work productively with the league to accomplish these important changes.”

Other goals include establishing a mentoring program for players of colour who are targeted by racial slurs. Those players often don’t know where to turn, or who to tell, Kane said.

“We’re going to be an outlet for young kids who don’t know what to do or how to go about reporting these incidents,” he said.

During a joint interview with Kane that TSN posted May 22,16-year-old player Myles Douglas shared that he was the target of racist insults in at least half of his 45 games this season while playing with the North York Rangers of the Greater Toronto Hockey League. Douglas said referees typically told him they didn’t hear the slurs so they couldn’t do anything about it. The new coalition may give players such as Douglas another reporting option.

The GTHL, the world’s largest minor hockey league, subsequently refused to say how often racial taunts and insults occur in its games. The league keeps secret statistics on penalties called for such taunts.

After Aliu went public with his story seven months ago, the NHL pledged to introduce a whistleblower program. Details of how that program will eventually work remain unclear.

"I don't think anything on that is set in stone yet," Aliu said.

Aliu and Kane both said they hope to help design a program independent of the NHL that would encourage players to report racism without having to worry that they are jeopardizing their careers.

“Part of the change is helping people feel confident to speak up,” Kane said.