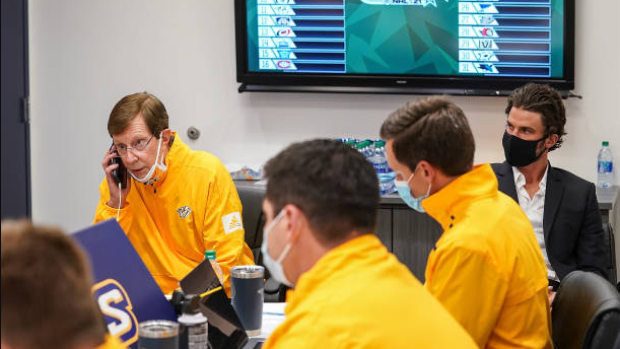 It appears trading Viktor Arvidsson to the Los Angeles Kings last week was just the start of what's shaping up to be a busy off-season for the Nashville Predators.

“I think we need to go in a little bit different direction,” Poile said. “I'm not saying we're going to make a whole bunch of changes, but I think it's time to make some changes.

While some have argued the team elected to move Arvidsson in order to avoid losing him in the expansion draft, Poile said he's looking to make a deal to ensure Seattle picks a player of his choosing off the Predators' roster.

“Ideally, if we could strike a deal to determine a certain player who we would lose, I’d like to do that,” Poile said.

The Predators enter this off-season with just 14 players under contract for next season and $22 million available in cap space, according to CapFriendly.

Latest on the Avalanche

Peter Baugh of The Athletic writes that the Colorado Avalanche face no shortage of tough decisions this off-season with Gabriel Landeskog, Philipp Grubauer and Brandon Saad slated for unrestricted free agency and star defenceman Cale Makar set to become a restricted free agent.

Baugh notes that while Landeskog and the Avalanche have both stated a desire for the team's captain to remain in Colorado, the franchise must also ensure they keep space clear to re-sign Nathan MacKinnon in 2023.

He adds that talks with Landeskog are expected to pick up in the near future, while conversations with Grubauer have yet to gain steam.

Landeskog, 28, has spent his entire career with the Avalanche since being selected second overall in the 2011 NHL Draft. He posted 20 goals and 52 points in 54 games this season, adding four goals and 13 points in 10 playoff games. He carried a cap hit of $5.57 million over the past seven seasons with the Avalanche.

Colorado is projected to have just under $25.5 million in cap space this off-season, according to CapFriendly, with just 11 players under contract for next season.

Oilers the favourites to land Keith?

TSN Hockey Insider Darren Dreger reported last week that Duncan Keith is "likely" to be moved to either the Seattle Kraken or Edmonton Oilers as he looks to finish his career out west.

Kurt Leavins of the Edmonton Journal believes that the Oilers should be the front-runners to land Keith, as they are closer to winning and should have a better supporting cast than an expansion team.

Keith, 37, is a three-time Stanley Cup champion with the Chicago Blackhawks and remains signed for two more seasons at a cap hit of $5.54 million. He had four goals and 15 points in 54 games with the Blackhawks last season.

According to CapFriendly, the Oilers are projected to have $16.2 million in cap space this off-season, though Dreger added an extension with Adam Larsson remains close and the team is still expected to hold contract talks with pending free agent defenceman Tyson Barrie.