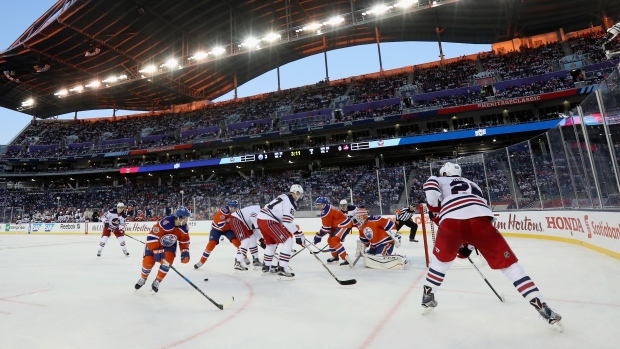 The 1,271-game schedule, released Tuesday, includes the Heritage Classic between the Calgary Flames and Winnipeg Jets on Oct. 26 at Mosaic Stadium in Regina.

It marks the first Heritage Classic — a series of outdoor games held in Canada introduced in 2003 — that will be played in a Canadian city without an NHL team.

The Canucks will play their home opener against the Los Angeles Kings on Oct. 9, exactly 49 years after the franchise's first NHL regular-season game, also versus L.A.

Hockey Day in Canada on Feb. 8 features all seven Canadian teams in action. The Rogers television broadcast will be based out of Yellowknife.

The Jets host the Ottawa Senators in an afternoon game to kick off the day.

The Montreal Canadiens entertain the Toronto Maple Leafs and the Edmonton Oilers host the Nashville Predators in early evening games.

The final game features the Canucks home to the Flames.

The season begins Oct. 2 with four games, including the Maple Leafs home to the Senators and the Canucks facing the visiting Oilers.

Other special events include:

— The Chicago Blackhawks and the Philadelphia Flyers squaring off Oct. 4 in Prague, Czech Republic.

— The Buffalo Sabres facing the Tampa Bay Lightning in two games on Nov. 8 and 9 in Stockholm, Sweden.

— The Winter Classic between the host Dallas Stars and Nashville Predators on Jan. 1 at the Cotton Bowl.

— An outdoor game between the Colorado Avalanche and Kings on Feb. 15 at the U.S. Air Force Academy's Falcon Stadium in Colorado Springs, Colo.

The season concludes April 4 with 15 games, including a Leafs-Canadiens game in Toronto and a Battle of Alberta between the Oilers and Flames in Calgary.