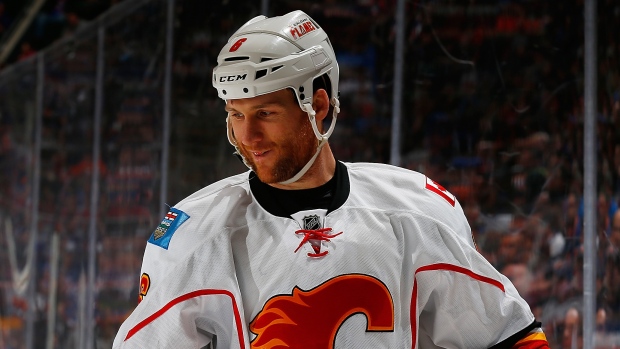 The National Hockey League has applied for a judicial review, a form of a lawsuit, against the NHL Players' Association to vacate the reduced 10-game suspension of Calgary Flames defenceman Dennis Wideman.

Wideman's suspension for hitting linesman Don Henderson on Jan. 27 originally drew a 20-game ban from the league, but a neutral arbitrator later reduced the suspension to 10 games.

The league's goal is to have the suspension restored to 20 games.

NHL Deputy Commissioner Bill Daly said in a statement, "We can confirm that the National Hockey League today filed an action in the federal district court for the Southern District of New York seeking to vacate Arbitrator James Oldham's arbitration decision reducing the League's supplementary discipline suspension to Player Dennis Wideman from 20 to 10 games. We believe that Arbitrator Oldham, in reaching his decision, exceeded his contractual authority by failing to properly apply the parties' collectively bargained standard of review.

"Today's action was motivated primarily by our regard for the collective bargaining process and the importance of maintaining and safeguarding the parties' reasonable expectations arising from the agreements made in that process. The timing of today's filing was dictated exclusively by the requirements of the federal rules governing these actions.  We do not intend to offer any further comment pending the conclusion of the court's review."

NHLPA spokesman Jonathan Weatherdon told TSN Hockey Insider Pierre LeBrun, "We are disappointed that the NHL has chosen to challenge the award of the Neutral Discipline Arbitrator (NDA) in court, as the collective bargaining agreement clearly provides that the decision of the NDA is final. We are confident this action is completely without merit and that the court will agree."

The Collective Bargaining Agreement between the League and Union states that "the (Neutral Discipline Arbitrator's) decision shall be final and binding in all respects and not subject to review."