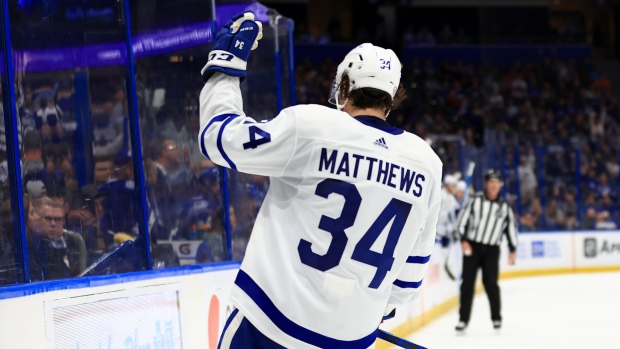 Auston Matthews' record-breaking week has been capped off by being named the NHL's First Star of the week ending Apr. 10.

The Toronto Maple Leafs centre is joined by Washington Capitals defenceman John Carlson and winger Jonathan Huberdeau of the Florida Panthers, rounding out the Three Stars.

In four games last week, Matthews had seven goals and 11 points to lead the league. The 24-year-old Matthews broke the Leafs' single-season goals record during a game with the Dallas Stars on Thursday, notching his 55th and 56th goals of the season, breaking the mark held by former Leafs captain Rick Vaive. Matthews added two more goals in Saturday's 3-2 win over the Montreal Canadiens, making it 51 goals in his last 50 games, becoming the first player since Mario Lemieux in 1996 to do so. The reigning Rocket Richard Trophy winner, Matthews currently leads the NHL with 58 goals on the season, eight more than Leon Draisaitl of the Edmonton Oilers.

Carlson, 32, notched eight points in three games last week, including a four-point night during a 4-3 win over the Tampa Bay Lightning. Currently in his 13th NHL season, Carlson is currently fifth among defencemen in scoring with 14 goals and 49 assists in 2021-2022.

Huberdeau, 28, had a five-point game last week in the Panthers' wild 7-6 overtime victory over the Leafs, including scoring the game-winning goal, in a game where the Panthers had trailed 5-1. During that game, Huberdeau became the first ever Panthers player to cross the 100-point plateau. The Calder Trophy winner as the NHL's top rookie in 2013, Huberdeau leads the league in assists with 77 and has 104 points on the season, four behind Oilers forward Connor McDavid in the Art Ross Trophy race.