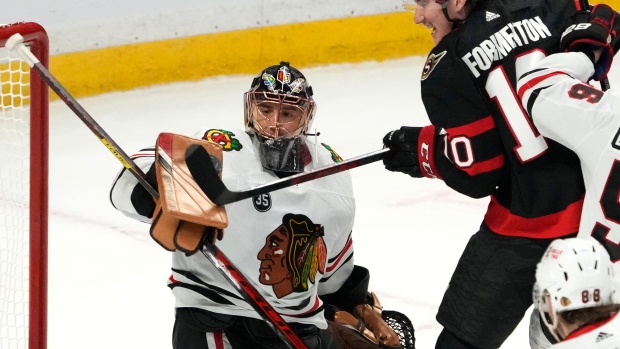 While Marc-Andre Fleury has not yet decided whether he wants to be moved at the deadline, the Chicago Blackhawks appear to have set their price in case he's open a deal.

TSN Hockey Insider Pierre LeBrun reports the Blackhawks will be asking for a first-round pick - or a first-round prospect - along with a mid-round pick in exchange for the veteran netminder. He notes the second pick is likely dependent on whether Chicago will have to take back a contract to complete the trade and how much of a hit that contract is.

Despite speculation linking Fleury to Toronto, LeBrun clarified that Chicago's asking price was tailored for all teams - not just the Leafs.

And to be clear, that’s what I believe is a general asking price from Chicago for any team. Not one necessarily tailored just to Toronto.

As of Sunday, Fleury's agent Allan Walsh, said there was no update on whether the 37-year-old pending unrestricted free agent would accept a trade at the deadline.

“There has been great communication between Marc-Andre Fleury and Kyle Davidson," Walsh told LeBrun via text message. "We’ve all talked but there are, as of today, no updates to report on his situation.”

Carrying a $7 million cap hit, Fleury has a 19-20-4 record with a 2.92 goals-against average and .908 save percentage this season with Chicago. His four shutouts are tied for the third-most in the league this season with Maple Leafs goaltender Jack Campbell and Pittsburgh Penguins netminder Tristan Jarry and Darcy Kuemper of the Colorado Avalanche.

Fleury, the reigning Vezina Trophy winner, has played in 18 NHL seasons with the Blackhawks, Pittsburgh Penguins and Golden Knights, winning three Stanley Cups with the Penguins in 2009, 2016 and 2017 and leading the Vegas Golden Knights to the Cup Final in 2018.

After seeing Arizona Coyotes defenceman Jakob Chychrun sustain a lower-body injury over the weekend, LeBrun wondered in The Athletic whether the Montreal Canadiens will keep defenceman Ben Chiarot out of the lineup for asset protection this week.

LeBrun notes that Chiarot's market has been stalled with uncertainty around whether Anaheim Ducks defenceman Hampus Lindholm will be available at the deadline. Once, Lindholm's situation is resolved - via an extension or trade - buyers who missed out will turn their attention to the 30-year-old Chiarot.

After a making a deal to acquire Tyler Toffoli from the Canadiens last month, LeBrun reports the Calgary Flames remain interested in trying to land Chiarot. He adds, however, that the Flames currently see Montreal's asking price as too high - noting that the Canadiens are believed to have strong interest in Flames 2019 first-round pick Jakob Pelletier.

Chiarot, who carries a $3.5 million cap hit as a pending unrestricted free agent, is listed at No. 3 on the TSN Trade Bait board. He has seven goals and 18 points in 54 games this season.

While most players will say they tune out the rumours involving them, Ottawa Senators head coach DJ Smith spoke candidly on how the deadline affects athletes and the need to keep an open dialogue as March 21 looms.

“I think this is still a stressful time,” Smith said. “I think one of the myths is they’re adults and they can handle this stuff. That’s just simply not true. Whether it’s junior or professional, they have to be talked to on a regular basis. Everybody has feelings and everyone has mental health.

“Everyone has highs and lows and at this point of the year if you’re a guy that doesn’t have a contract and is possibly being traded, it’s not just you, it’s your family. It’s moving, it’s the whole thing that goes with it. It’d be wrong to say that we think it doesn’t bother people because it has.

“If anyone in life knew they were changing jobs, changing cities and just changing everything within the next month, a lot of people wouldn’t sleep every night. You have to put it into perspective and see what happens here. That’s (Dorion’s) job and my job is to coach the team, but when they’re here, I talk to them and try to get the best out of them every single day.”

The Senators are projected to be sellers once again at the deadline this year, with Nick Paul, Zach Sanford, Michael Del Zotto and Josh Brown all holding spots on the TSN Trade Bait board.

While trades are out of the control of most players, Victor Mete's next move may be in his own hands.

The Senators have given Mete's agent, Darren Ferris, permission to speak to teams about a potential trade, according to TSN Hockey Insider Darren Dreger.

Dreger noted the return for Mete will likely be a draft pick. The 23-year-old has seven assists in 23 games with the Senators this season.

Carrying a cap hit of $1.2 million, Mete is scheduled to become a restricted free agent this summer.