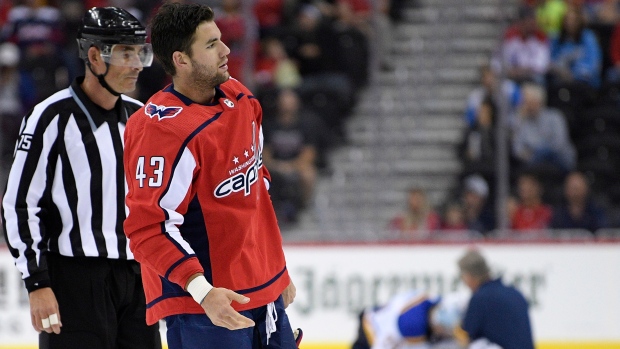 Wilson was suspended 20 games earlier this week by the league's department of player safety for a blindside hit to the head of St. Louis Blues centre Oskar Sundqvist in a preseason game on Sunday.

He currently stands to forfeit $1.26 million in salary if the suspension holds at 20 games.

The appeal will be heard by NHL commissioner Gary Bettman and a date for that hearing has yet to be set. Once Bettman issues his decision following that hearing, Wilson will still have the option to further appeal to a neutral arbitrator.

In 2012, Bettman elected to reduce a 25-game suspension to Raffi Torres by four games upon appeal. In the most recent appeal to the commissioner, he elected to uphold Dennis Wideman's 20-game ban for abuse of an official. In Wideman's case, a neutral arbitrator ruled the suspension be set at 10 games, though he had already served 19 games of his suspension at the time.

The Capitals forward has been suspended four times in his nearly five-year career, all four occurring in the past 13 months.

During the 2018 Stanley Cup playoffs, Wilson was suspended three games for a check to the head of Pittsburgh Penguins centre Zach Aston-Reese which broke his jaw and caused a concussion.

In 2017, Wilson was suspended twice in the preseason. The first offence resulted in a suspension of two games while the second incident just a week later landed him four games, two in the preseason and two to start the regular season.

The 24-year-old signed a six-year, $31 million contract with the Capitals in July.

The Capitals are off to a 1-0-1 start without Wilson this season.