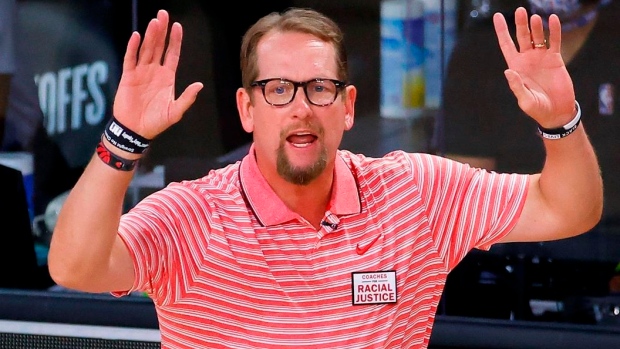 TORONTO – Fresh off an impressive season that came to a disappointing end last week, the Toronto Raptors can officially shift their focus to an important off-season that will set them up for whatever comes next.

The first step was an obvious one, and perhaps the easiest decision they’ll have to make over the coming months.

Just days after being eliminated from the playoff, the Raptors signed head coach Nick Nurse – the NBA’s Coach of the Year – to a multi-year contract extension Tuesday morning.  Terms of the deal were not disclosed.

“My family and I will always be appreciative of Larry Tanenbaum and MLSE ownership for this opportunity,” Nurse said in the team’s press release. “I’m grateful to [team president] Masai [Ujiri], [general manager] Bobby [Webster], and the players for their trust and their hard work. Toronto has been my home for the past seven years, and I look forward to it being home for many more. I’ve watched this franchise grow and reach the pinnacle, and I look forward to the challenge of helping us win another championship.”

Nurse had one year left on his previous deal. Given the success he’s enjoyed in his first two seasons at the helm, there’s no way Toronto was going to let him go into the 2020-21 campaign as a lame-duck coach. This was a no-brainer for the organization and well-deserved recognition for the 53-year-old, who has a career record of 111-43 – good for the highest winning percentage in NBA history (.721).

After more than two decades of coaching around the world and in the G League, formally the D-League, and five years of serving as an assistant on Dwane Casey’s Raptors staff, Nurse finally got his first opportunity to lead an NBA team ahead of the 2018-19 season.

In his debut campaign, he became the ninth rookie head coach to guide his team to an NBA title. That’s a tough act to follow, but the sequel was arguably more impressive.

Despite losing the player most responsible for delivering Toronto its first championship – finals MVP Kawhi Leonard – and dealing with a seemingly endless string of injuries, Nurse led the Raptors to an improbable 53-19 record this past season. It was the second-best mark in the NBA and the highest winning percentage (.736) in franchise history, earning him Coach of the Year honours.

One of Nurse’s great qualities, on and off the court, is his adaptability. He’s proven that he can win with different types of teams. Given the unusual circumstances of the recent season, he’s also shown that he can lead through adversity. Regardless of what the future holds for the roster, the Raptors believe Nurse is somebody that can get the most out of it.

“Our confidence in Nick just continues to grow, and part of that comes from what we’ve experienced together,” said Ujiri. “The past two seasons have been unlike any other in our team’s history – first, winning our championship, and then navigating a global pandemic and committing long-term to the fight against racism and for social justice. Nick has proved that he can coach on the court and lead in life, and we’re looking forward to accomplishing great things in the future.”

For the Raptors, much of this off-season will be about setting themselves up for the summer of 2021, when they could have the cap space to chase a big-name free agent in a loaded marketplace that might include reigning MVP Giannis Antetokounmpo. It will influence every move they make over the coming months, at least to some degree.

But before the can make important personnel decisions this fall, and certainly before they can pitch Antetokounmpo or another star in less than a year from now, they need to solidify their foundation. Extending Nurse – who is already one of the most well-regarded coaches in the league – was the logical first step.

Now, the attention shifts to the front office, where Ujiri and Webster are also in need of new deals. Both execs are going into the final season of their contracts. Locking them up long-term will be the next big priority for MLSE and the Raptors.​