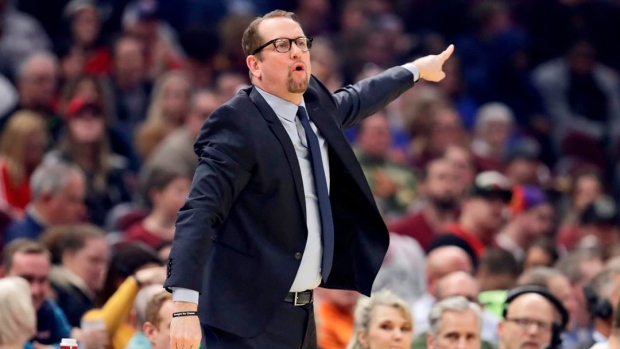 TORONTO – Nick Nurse is nothing if not creative.

Video conferencing with the media on Tuesday morning, the Raptors’ head coach was asked for his thoughts on the NBA’s recently approved plan to restart the season at Walt Disney World Resort next month.

He’s a fan of what the league has come up with so far – 22 teams, eight regular-season games and a (mostly) traditional playoff format. He’s even cool with the possible play-in tournaments. It’s as fair and simple as possible, considering the unique circumstances.

But what about clubs that earned home-court advantage, like Toronto, who are currently seeded second in the Eastern Conference? With games being played in a neutral location, should those teams be compensated somehow?

Nurse has an idea. Appropriately wearing a ‘box-and-one’ hoodie, which commemorates the “janky” defensive scheme his team used to flummox the Golden State Warriors in The NBA Finals a year ago, he shared a story from his time coaching in the Belgian League in 1998.

“In the Belgian National Cup, they let in every team in the country from every division,” Nurse explained. “In the first division the guys are pretty good, the guys are getting paid, but it falls off pretty quickly after that – Second, third division, fourth, where guys are just playing at night when they get home from whatever. So, when you draw a team lower than you, they get 10 points to start the game for every division they are lower than you.”

“I was only there one year and we drew a fourth division team so they got 30 points. It was 30-0 on the scoreboard before the game started. And we’re on the road in this little gym with cement floors, and of course they came out bombing threes and it was 39-2. We finally took the lead with like 1:15 to go in the game. We ended up winning the Belgian Cup but first round we almost got knocked out. So, I’m promoting that rule for the higher seed to get 10 or 20 or 33 points to start. That’s my suggestion to Commissioner [Adam] Silver but I haven’t heard back from him yet.”

He is kidding, of course. At least he’s mostly kidding. However, it’s hardly unusual to see or hear Nurse thinking outside of the box.

One of the things the Raptors’ second-year head coach has become known for is his fondness of experimenting with unconventional lineups, coverages and plays. He’s the guy that isn’t afraid to be open-minded, tinker and try different things, even on the game’s biggest stage. He is basketball’s mad scientist.

His willingness and ability to adapt on the fly helped him stand out during the hiring process, when he was promoted from his role as an assistant on Dwane Casey’s staff to Casey’s successor back in 2018. Throughout his career, coaching overseas and in the NBA development league, Nurse has always had to be flexible in his approach. It’s something he’s preached since getting the Raptors gig and it’s one of the defining qualities that his championship team has inherited.

Now, as Nurse gets set to lead his club through uncharted waters, that trademark flexibility will be more important than ever.

“You can try to dream up some ideas of what it’s going to be like down there or plans you might have – and we’ll do that, of course, talk about a lot of things – but I think once you get there you’re going to get more familiar with the landscape, it’s probably going to change or feel different than you expected it to, and then you’re going to have to start making adjustments,” said the 52-year-old head coach. “I see a lot of things that come into play normally probably coming into play even more.”

In this case, it might not come down to what Nurse has up his sleeve – a zone defence or a funky position-less unit. The bigger challenge will be managing day-to-day obstacles in an unprecedented situation. Teams are about to be tested in ways they have never been tested before.

If everything goes according to plan, the NBA season will resume in Orlando, Florida,on July 31. Players will have a few weeks to ramp up and get back into game shape after a long layoff – the campaign has been on hold since the COVID-19 pandemic forced the league to suspend play on March 11.

Teams will be confined to the Disney complex. Family members are only permitted after the first round of the playoffs is complete, according to reports. The two clubs that are fortunate enough to go the distance will have spent nearly three months in the NBA’s bubble and away from home.

There will be daily coronavirus testing, relatively empty arenas without fans, tighter schedules, and social distancing measures in place off the court. Professional athletes are creatures of habit and routine. Make no mistake, this is going to be a major adjustment for everybody involved.

The teams that are able to “go with the flow”, as Nurse likes to say, could be the ones that find a way to thrive in this very strange environment. A veteran group like the Raptors may have an advantage in that regard.

“Your attitude day-to-day is going to get challenged in a different way,” Nurse said. So, how are you going to be able to – for lack of a better word – keep people from just complaining? ‘Man, it’s too hot, the sun’s out’ or, ‘It’s too cold, the air-conditioning’, whatever. You’re going to have to try to keep an extra positive attitude for starters and you’re going to have to go with the flow a little bit, and understand going in that this is going to be different.”

Assuming they maintain the third-best record in the NBA, the Raptors would have had home-court advantage in any series except for a potential Conference Finals rematch with the Bucks or against the Lakers in the Finals. Not having it is unfortunate. As most teams would attest to, Toronto’s Scotiabank Arena is one of the league’s toughest buildings to play in.

Would the Raptors have been able to pull off their thrilling Game 7 win over Philadelphia in the second round of last year’s post-season without home court? Would they have stolen Game 1 of The Finals from Golden State, which set the tone for that series? Being able to host those crucial contests helped a great deal, Nurse admitted, but he also noted that the team’s other three wins over the Warriors came on the road.

“We’re a good team at home, we’re a good team on the road, we don’t really care where we have to play,” he said. “That means we outta be good in neutral. I think this team loves to play, we love to compete, we love to try to figure things out. And at the end of the day, with everything else that’s going on when you finally get there and the ball goes up, can you laser focus in and get the job at hand done?”

The Raptors still haven’t finalized their travel plans, according to Nurse. With half of the team in Toronto and the other half scattered across the United States, they’ve looked at pre-camp options on both sides of the border. They’re hoping to settle on one that will be as safe and as efficient as possible, which makes reconvening in Orlando later this month or in early July the most likely scenario. Whenever and wherever they get back to work, Nurse is confident they’ll be ready to go.

With a couple of notable exceptions, the bulk of Toronto’s championship core remains intact. The chemistry they’ve built and the high basketball IQ that helped them win the title – and has allowed them to defend it admirably without Kawhi Leonard and Danny Green – should serve them well after almost four months off. But, as they try to prepare for the unpreparable, their coach’s knack for improvisation could be the key to their continued success.​