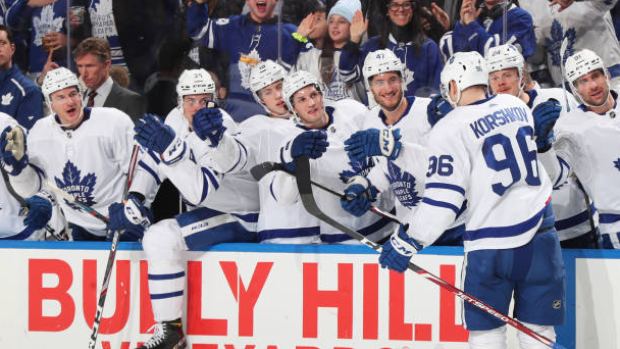 The Toronto Maple Leafs’ 2019-20 regular season was put on indefinite hiatus two weeks ago, when the National Hockey League hit pause on its operations in response to the COVID-19 pandemic.

With no certainty on when or if the NHL can resume before next fall, there’s no time like the present to start pondering the Leafs’ future –­–specifically the team’s most promising prospects headed down the pipeline.

“The Leafs have gotten players from all over the NHL draft, and that’s good because you can’t just build your team in the first round,” said TSN’s Director of Scouting Craig Button. “When you add to an already high-end group like theirs, it’s a real positive. And when you can add some players on really good entry-level contracts, I think that’s going to be really solid for the Maple Leafs.”

Below, Button checks in on two players primed to make a full-time jump to the NHL after debuting with the Leafs this season, and then ranks Toronto’s top young talents who are still waiting to emerge.

“I think there’s been a significant maturity in Liljegren’s understanding of what his game is. He seemed to be a player that was forcing things offensively, and lots of mistakes were happening. But he’s balanced out and understands that what he was at 16, he’s not going to be now. And what he’s going to be in the NHL is going to have to be a really good two-way defenceman.

“When I kept watching him [in his draft year], I kept thinking, ‘he could be Trevor Daly,’” Button said. “Daly was a great skater, he moved the puck up the ice, didn’t put up big numbers but he was a good player. I think Liljegren could be that too.”

“Korshkov’s going to wear you out, he’s going to drive the net, he’s going to push the [other team’s] defencemen. He’ll make life uncomfortable for you when he skates down the wall and he’s in the corner. The way Korshkov skates, the way he works, he attacks, and he goes to the net. He’s not interested in staying outside.”

“If he could play the game like Kyle Clifford does, then you can play him up [the lineup], you can play him down a little, and that’s big,” said Button. “That’s the way Clifford plays, with that physical edge. Clifford was an important member of those L.A. Kings teams because he’s someone who leaned on you and competed. When the Kings won those Stanley Cups [in 2012 and 2014], they wore you down. They had some real top-end players, but they had Clifford-type players, and I think Korshkov can be that too.”

Toronto’s next wave of prospects:

“[Robertson’s] an A-level prospect. He’s an elite, elite offensive player. How many organizations have elite offensive players coming? There’s not very many. His size, or lack thereof [5-foot-9 and 164 pounds], was always obvious, but you watch his game, and he’s quick, he’s fast and he’s got the puck all the time.

When the shoe dropped for me, it was at the 2019 CHL/NHL Top Prospects Game [in Red Deer, Alberta]. I had seen Robertson play in the Hlinka in August 2018, and he was brilliant [scoring five points in five games]. But you see all this quickness and you could also see he’s not anywhere near physically mature then, but at the prospect’s game, it was just like, ‘that kid is a damn good player.’ Because now he was with everyone else who was supposed to be a top prospect, and that’s when it became crystal clear to me how good he is.

It’s one thing for a player to think, ‘I think I can do it,’ and it’s an entirely other thing for a player to say, ‘You know what, I know I can do it.’ And that’s where I think Nick went, he went from thinking to knowing. His mind is exceptional; his quickness, his elusiveness are exceptional. He’s got great hands; he’s got a great shot. So now you watch him play, and his size doesn’t even come into consideration for me.”

“He’s like Jake Guentzel,” said Button. “Jake was very similar [early on] - small, hadn’t physically matured, needed more time. But if you go back, all Jake did was produce. It was going to take him a little bit of time to get that physical maturity, and now you watch Jake Guentzel, and I think Nick Robertson is like a clone."

-Drafted by Toronto in the fourth round, 124th overall, in the 2019 NHL Entry Draft. Not currently signed to a professional contract.

Abruzzese is not a player who raced to get somewhere. But by the 2018-19 season with the USHL’s Chicago Steel, there was no way you couldn’t pay attention to him. He’s that good. He was cagey. All of a sudden, he’s got you in spots and he’s a really smart player that’s ready to take advantage of you. So now he’s more physically mature [at 5-foot-9 and 160 pounds], he’s quicker, he’s faster, and he’s really on the puck.”

“Tyler Bozak,” said Button. “He might be more tenacious than Bozak, but he’s smart [in the same way]. And Bozak was another late bloomer. Abruzzese was a dominant freshman in college hockey last season. He’s a little bit older [at 20], but when you go to college hockey and you play against older players and you can be that good, that’s a really good sign.”

“He’s a top-notch offensive player. It’s neck-and-neck between him and Abruzzese [as to who is the better prospect]. The beautiful thing about Abramov is he’s really versatile – he can play right wing, he can play left wing, he can play centre. He’s got outstanding hockey sense.

Everyone wants more skill, everyone wants more scoring, but Abramov can kill penalties too. He can play against another team’s best players and score and take advantage as well as play in those offensive situations. He’s equal part playmaker and goal scorer. He’s got this sneaky quickness, where because the hockey sense is so good, he recognizes the play and he’s there, he’s on you, or he’s on the puck. He’s one of those players that when he gives the puck, he’s ready to get it back. And that makes him really dangerous.

When he came over to play junior hockey, he wasn’t strong enough. Abramov loves to get inside and be on you. But he didn’t have the strength to get those results originally. Now, at 5-foot-11 and 162 pounds, when he leans on you or gets inside, you can’t push him away.”

“He might be a little like Mikael Backlund,” said Button. “I don’t think in the NHL that Abramov is going to be a big, high-end scorer, but when you can get a player who can contribute offensively, he can kill penalties, you can play him in different spots. That versatility and adaptability in a cap world is really valuable and that’s what he has.”

“SDA always had the puck. But you can’t just have the puck and not challenge. It’s like a basketball player who dribbles around, and they never get inside the paint – you’ve got to get to the shooting areas. So, what SDA has done a really good job of this year is he’s attacking more inside the dots. He’s attacking more into that slot area, making plays into there.

You’ve got to attack, you’ve got to make yourself dangerous, you’ve got to make opponents play you. I think SDA took steps forward in that regard. I know he’s a smaller player [at 5-foot-10 and 163 pounds], so he might not have felt the confidence to go into those areas and attack, but if you don’t, you’re going to have a really hard time being productive at the NHL level. So that was a strong step in the right direction this year for SDA.”

“He’s not Mat Barzal, but Barzal had the same problems,” explained Button. “All he ever wanted to do was hold the puck. And Mat has learned from that and it’s made him a very good NHL player. When I think about SDA, I think about players like that who are confident with the puck. Tyler Johnson, as he progressed, had the puck but when he really matured is when he became a lot more confident playing that game in tight areas. So, I’d say SDA is a lower-case Tyler Johnson.”