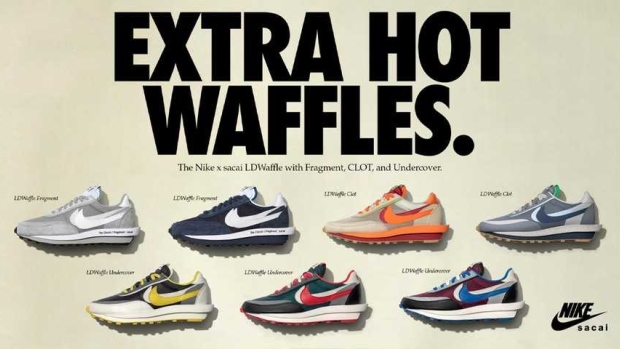 Nike and sacai are partnering up to drop three major design collaborations of its ever-popular sacai x Nike LDWaffle line, alongside partners Fragment, CLOT and UNDERCOVER.

Fragment and CLOT have each designed two new colourways for the sacai x Nike LDWaffle while UNDERCOVER has designed three.

Fragment’s LDWaffle designs come in flooded grey and flooded navy to match fragment’s traditional aesthetic.  These two colourways will be the first to drop on August 24.

UNDERCOVER’s LDWaffle designs begin with its first combination of a black, white and yellow version.  That design is followed up with a dark teal shoe paired with a red detailing on the classic Nike check mark.  The final design comes in dark magenta with a blue Swoosh.

The release date for the two CLOT and three UNDERCOVER pairs have not yet been revealed, but they are expected to drop later this year after Fragment’s two shoes are released.