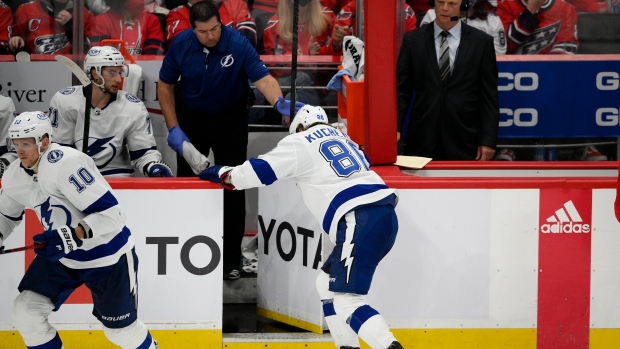 Nikita Kucherov missed the entire regular season last year and it looks like could miss a chunk of this season as well.

Head coach Jon Cooper told reporters Monday that Kucherov's injury is "definitely not a day-to-day thing" and the team is waiting for more information to definitively determine how much time he will miss.

Jon Cooper says Nikita Kucherov is going to be out for a little while. “Definitely not a day-to-day thing.” Will wait to get more information before having a clearer idea just how long he’ll be out. #GoBolts

The 28-year-old appeared to tweak something after a minor collision with Garnet Hathaway of the Washington Capitals during Saturday night’s matchup. Kucherov skated back to the bench slowly and seemed to be in considerable pain before eventually leaving for the dressing room.

Kucherov missed the 2020-21 regular season after having hip surgery in December, but was able to return for the playoffs. The Russian led the league in postseason scoring with eight goals and 24 assists for 32 points over 23 games as the Bolts won their second straight Stanley Cup.